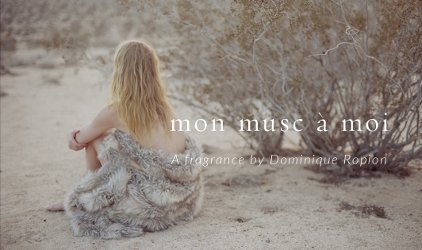 A Lab On Fire's new fragrance, Mon Musc à Moi, sounded reasonably tempting. It was developed by perfumer Dominique Ropion, and it's from a brand that's done more than one fun gourmand (What We Do In Paris Is Secret, Paris*LA). The ad copy was a little silly, but it usually is, and while I couldn't say exactly what they mean by "contemporary retro", it sounds like it can't hurt, right?

As it turns out, Mon Musc à Moi smells entirely contemporary to me, and I probably would have liked it better with another dash of retro.1 I would call it a fruity vanilla musk. The opening smells like fruit candy, or maybe a brightly-colored Popsicle. The heart notes smell like marshmallow florals and the dry down adds sheer vanilla and the tiniest sliver of toffee. It's not really foody, nor is it a vanilla bomb: think Eau d'Italie Morn to Dusk or Diptyque Eau Duelle or the like. The whole thing is wrapped in gauzy — but persistent — clean musk. It probably leans a little feminine, but mostly it leans sweet: anyone could wear it. The lasting power is excellent; I could still smell it on my Fitbit days later.

Verdict: I'm up for a sweet gourmand every so often, especially at this time of year, but Mon Musc à Moi doesn't really fit into the gourmand category, and I'm sorry to say it mostly annoyed me. I didn't care for the sweet synthetic fruit in the opening, and while some may appreciate the light hand on the toffee and vanilla, the result is that you're left with a very sweet, very clean musk and not much else. It reminded me vaguely of my son's favorite hand wash, Method Sweet Water, which I dislike enough that we keep separate hand wash containers (one for each of us) in the bathroom and kitchen.

While it's decidedly not my thing, I do think many people will like Mon Musc à Moi, and I've seen nice reports elsewhere. It's worth trying if you're looking for a vanilla musk that isn't too heavy for everyday wear.

1. Later I realized maybe not: Love's Baby Soft never appealed to me, and this could be the contemporary version.