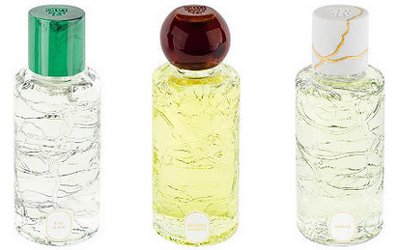 Collection 34 welcomes a trio of eau de parfums, amazing compositions in special bottles. Unique and irresistible, they will whisper a thousand stories on the skin.

Eau Mage ~ "Ambroxan, mandarin zest, spices - An androgynous interplay of scents built around the volatile molecule ambroxide. With sensual amber accents, it combines some mandarin zest with a touch of rose, spices and musk. An uplifting and irresistible fragrance." (Originally released in 2011 as a limited edition.)

Ôponé ~ "Turkish rose, Safran, cumin and guaiac wood - A flower warmed with a hint of saffron, a little cumin and guaiac wood with leather, smoke and liquorice accents, bearing the name of an African port on the Spice Route." (The original Olivia Giacobetti composition was released in 2001, and later discontinued).

Diptyque Eau Mage, Ôponé and Benjoin Bohème are $200 each for 100 ml Eau de Parfum. They are listed on the US Diptyque website as "boutique exclusives" but are distributed in retail stores elsewhere (Selfridges in the UK has them, presumably among others).