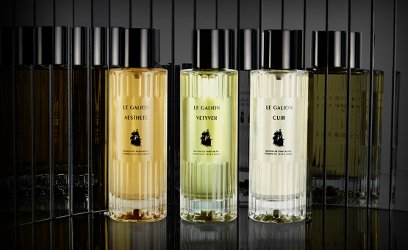 Aesthete ~ "Hidden behind each Le Galion fragrance is: a poet, a musician, a magician. A fragrance is more than the result of mixing flowers into a bouquet, or adding spices and woods to a selection of flowers. It requires a touch of magic, something Paul Vacher used to add when creating his masterpieces. In his mansion in the Parisian suburbs of Neuilly, with bottles lined up on the wooden shelves of his laboratory, he composed fragrances like others composed poetry or music. A fervent art lover and pianist himself, he was inspired by friends like Maurice Ravel. In a tribute to the aesthete and perfumer of the house, Le Galion has created Aesthete, an elegant and refined fragrance of Persian leather. Aesthete opens on Italian Mandarine, essence of Davana, hyperessense incense and Saffron, continuing on a leathery heart, Guaiac wood, Castoreum, Ouhd and Jasmin, all supported on a base of Sandalwood, Vanilla and White Musk."

Vetyver ~ In 1968, in the midst of the sexual revolution, Paul Vacher created the iconic fragrance Vetyver. Vetyver or “Male Flowers”. According to the launch campaign of the fragrance at the time, the perfume house went all the way to the Indian continent to source the flowers, they are called Vetiver. The fragrance was muscular and musky. Fresh, dry, and racy. A truly male fragrance. Le Galion is proud to relaunch Vetyver today, based on the original formula. A decidedly aromatic fragrance, opening with citrus notes of spicy Bergamot, Italian Mandarin, Nutmeg and Coriander, it develops an aromatic heart around Clary Sage, Lavender, Petitgrain, Tarragon and Verbena, and finishes with an intense wake of Vetiver, Sandalwood, Tonka Bean, and Musk."

Cuir ~ "In 1960, Dior asked Paul Vacher to create a fragrance that had presence and strength, but one that remained extremely refined. He created Diorling in 1963 based entirely around the scent of leather. Paul Vacher demonstrated his genius by choosing his materials with the utmost care and created an olfactory leather bag. The handbag of a woman, a beautiful luxurious bag, as soft on the surface as the skin of the neck of the wearer, an imaginary creamy, handcrafted leather creation. [...] But Paul Vacher was already established in the leather olfactory world. In 1931, he had created Scandal for Lanvin, still considered a masterpiece of modern perfumery. Celebrating his vision and talent, Le Galion is proud to present Cuir, an original creation on the theme of leather, a citrus opening of Bergamot and Elemi oil builds around White Lily, Ambergris, Musk and Sandalwood."