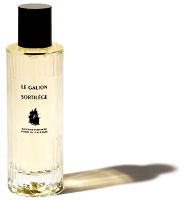 Historic French perfume house Le Galion is relaunching 9 of the brand's fragrances, including the best known, Sortilège, developed by perfumer Paul Vacher in 1936 (he had purchased the brand from its prior owner, and ran it until he passed away in 1975). Other fragrances in the newly reconstituted line include 222, Eau Noble, Iris, La Rose, Snob, Special for Gentlemen, Tubéreuse and Whip.

Sortilège ~ "The iconic fragrance of the House Le Galion and signature perfume of the famous Stork Jazz Club in New York in the 1930s, Sortilège returns today in a composition faithful to its origins. A floral aldehyde composition, a totally seductive fragrance full of history. Sortilège, displays an intense and mesmerising vapour trail of floral aldehyde, beginning with a soft blend of white flowers and ylang-ylang from Madagascar. The explosion of its floral bouquet reveals Egyptian jasmine and delicate notes of mimosa, sustained by narcissus. Turkish rose is the beating heart, partnered with Iris and leading into Indonesian sandalwood and vetiver on a background of animal and amber - an intense, mythical fragrance. Sortilège has a balanced bouquet of perfect elegance: feminine, refined and distinguished - the scent of a mysterious and confident woman. Intense, elegant and sensual, it exhibits the perfect alchemy between perfume and skin."

222 ~ "A small bottle of fragrance found in the archives of Le Galion. An unsigned creation dating from 1930-1935 left forgotten in a box. A new page in the history of the House of Le Galion opens with a bridge between the past and the future. A re-interpretation of this lost formula - unleashing a mysterious and sensual fragrance creation built around an amber oriental accord. 222 has a surprisingly soft opening with its mix of violet flowers and slightly sweet wood from the Kashmir. The contrast within this fragrance comes from the antique blending of aromatic balsamic, myrrh and styrax, contrasted with modern wisps of white musk. Sweet balsamic notes extend until the finish, allowing the wearer to discover the traditional subtlety of sandalwood and the refinement of leather."

Eau Noble ~ "1972: In Europe, the end of the 1960s was an important sociological turning point. Women are wearing men’s pants & fragrances, and joining the sexual revolution. Le Galion launched Eau Noble this year. This is a sporty, citrus, cyprus and leathery fragrance. Eau Noble, a citrusy, leather fragrance with a fully developed blend of bergamot, lemon, Italian mandarin and galbanum. The heart notes are floral aromatics and composed of lavender and sage, softened by the floral notes of geranium. To finish this leathery blend, base notes of oak moss, Indonesian patchouli, cedar wood and musks that contribute to give a roundness to the blend."

Iris ~ "In 1937, the fashion designer Cristobal Balenciaga moved to Paris. In the same year, Jacques Fath presented his first collection to the public and the first “Carré” Hermès was launched. [...] In the same year Paul Vacher launched his first single flower fragrance - Iris. An ode to the delicate and subtle flower, recreated from the original formula in a very elegant manner; an interpretation of the essence of the Art Deco period. Iris, queen of the powdery notes, is distinguished equally by top notes of green mimosa from the south of France and ambrette seed. Royal lily and rose magically combine with the powdery iris to warm the Atlas cedar and oriental amber. A fragrance embodying French chic with a natural elegance."

La Rose ~ "1950: Henri Matisse won first prize at the Venice Biennale. Cristobal Balenciaga hired Courrèges. Pierre Cardin set up his fashion house. Baby Doll lingerie is invented. Les Trois Suisses publish their first lingerie catalogue. Lycra is invented and Mother’s Day is introduced. Le Galion created La Rose, and dedicated it to all women. Paul Vacher used to smell more than 70 species of roses every year in order to elect the one to be used in the composition of this elegant and subtle fragrance, re- interpreted today with delicacy from the original formula. La Rose is not a true single flower fragrance since the main theme is enriched with sensual floral and refreshing aquatic notes. To finish, the patchouli and cyprus leave a bewitching trail."

Snob ~ "During the 1950s, fashion photos showed women with a cold, hard side, vaguely haughty and not to say... snobbish. Typically the models were shown considering a Manhattan skyline or the top of the Eiffel Tower with blank expressions. The magnitude of the New Look gave them some attitude. This is the time of twin sets, pearls and high heels. The films of the time also reflected this upscale attitude - “ Breakfast at Tiffany’s ”, “ High Society ”, “ The Barefoot Contessa ” and “ How to Marry a Millionaire ? ”. Reflecting the times, Paul Vacher created “Snob”, with its fruity spicy floral bouquet. Sumptuous and with a big personality, it is a fragrance for all trendy women, perfect for parties and gatherings. Snob has a floral bouquet of white flower, paired with rose, to give a sensual effect. Spices including Iranian saffron bring a heat that is sublimated by precious woods: Australian sandalwood and Virginian cedar, surrounded by white musk."

Special for Gentlemen ~ "1947: The Marshall Plan was launched. The French people dreamt of luxury and escape. Roger Vivier invented the stiletto heel, Christian Dior launched the New Look and Miss Dior, and Le Galion created Special for Gentlemen, a masculine fragrance, distinguished and refined; a fragrance to wear at all times. [...] A beautiful Oriental Amber fragrance that opens on fresh and aromatic notes. Subtle notes of lavender and lemon are accompanied by a touch of woody galbanum. A balsamic note of cinnamon brings softness to the blend. This lasting woody amber fragrance is achieved by generously combining amber, cistus labdanum and patchouli. Finally, soft balsamic notes and a slightly animalised note lend this sensual fragrance lots of sensuality - a marriage of vanilla, opoponax and castoreum."

Tubéreuse ~ "Le Galion launched Tubéreuse, this most narcotic of flowers in 1937. A creation inspired from an old formula in tribute to Paul Vacher’s personal taste for single flower fragrances. The production was important to him as a perfumer, to maintain both quality and his own mental and creative agility. The Tuberose flower exudes its scent anew in this ultra- feminine fragrance; sensual and melodious. A voluptuous and intoxicating fragrance. Tubéreuse has a sparkling start, opening with green galbanum and mandarin. The spices grow and are then followed by crisp fruit, raspberry and pear. Finally cedar and amber resonate on a background of musk and cyprus."

Whip ~ "1953: Queen Elizabeth II was crowned Queen at the age of 27 while New York celebrated the opening of the Guggenheim Museum and Audrey Hepburn starred in “Roman Holiday”. Le Galion launched Whip, a fresh and young fragrance, especially refreshing in the summer. Originally created for men, women also grabbed hold of it quickly. [...] Although in classic fresh and citrus fragrance territory, Whip exudes a certain modernity, It opens on a very citrusy note, created by the marriage of lemons from Verdelli and Calabrian bergamot. Tarragon, lavender and cardamom provide the aromatic notes. The heart of the fragrance is worked around floral notes such as jasmine, violet and a hint of iris, all accentuated by the powerful woody notes of galbanum. The background is softened and warmed with heady notes of oak moss, patchouli and vetiver grass oil. Leather notes give this fragrance its huge personality."

I will update with sizes and prices when I can.