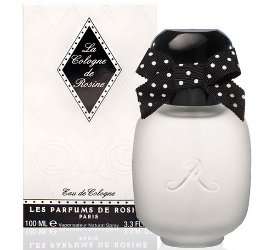 Today was one of those hot-hazy-and-humid summer days in New York when the air had a palpable, spongy weight, the subway stations could only be described as "infernal," and every trash receptacle was emitting its own unique stench. As a consequence, everyone was sweaty and miserable, and everyone — including me — was in a bad mood. One of the small comforts of my day was a sample vial of La Cologne de Rosine, the latest release from Les Parfums de Rosine, which refreshed me at a moment when I couldn't have tolerated my usual powdery or spicy-sweet floral fragrances.

La Cologne de Rosine is a rose-tinted interpretation of a traditional Eau de Cologne, with notes of bergamot, mandarin, rose, freesia, violet, white musk, cedar and amber. It was developed for Rosine by perfumer Nicolas Bonneville. If you've read Robin's recent posts on "old school" and "new wave" summer colognes, you may be in the mood to break out your own favorite colognes, regardless of the weather. I'd happily add La Cologne de Rosine to the "new wave" list. It begins with a tart lemons-and-oranges accord that cuts right through the heat. The rose isn't far behind, and it's a very bright, airy rose that shouldn't scare away rosephobics. I really like the watercolor-floral heart of La Cologne de Rosine — it's just enough of a twist on the traditional Eau de Cologne formula to make this fragrance feel like a Rosine creation. Pink roses, a few freesia petals, and some very clean woods in the base, plus a citrusy ripple-effect throughout, and you're done. The staying power feels more like an Eau de Toilette than an Eau de Parfum (i.e., it doesn't last more than a couple of hours on my skin), but colognes don't typically have much endurance anyway.

I'd categorize La Cologne de Rosine alongside Rosine's other sheer, zingy roses, including Diabolo Rose and Un Zeste de Rose. I wish I could somehow sneak a few bottles into Sephora and department stores where women might be looking for a hot-weather perfume — it's fresh and light, but not dumbed-down, and it still smells like a fragrance rather than some functional product. And if it made me even slightly less cranky on a sweaty late-July day, it's worth keeping in mind for any heat waves you may face in the near future.