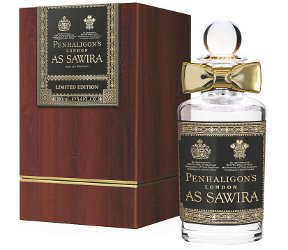 Penhaligon's has launched As Sawira, a new limited edition fragrance. As Sawira was originally introduced earlier this year (in a fancier bottle) as part of the DFS Masters of Fragrance event in Abu Dhabi,* and now joins the Trade Routes collection.

Penhaligon’s Trade Routes collection takes inspiration from the abundance of luxurious goods which arrived in London to be traded at the end of the nineteenth century.

Penhaligon's As Sawira is available at Harrods, 100 ml Eau de Parfum for £150.

*Here is the fragrance description from Masters of Fragrance:

Penhaligon’s of London presents As Sawira, a beautiful and exotic fragrance that captures the essence of warmth, opulence and sensuousness. It features head notes of saffron, bergamot and rare davana; heart notes of rose, cardamom, peach and jasmine; and a sensual base of oud, vanilla, myrrh and musk. This luxurious scent is inspired by points on the globe where the most decadent commodities were bought, sold and traded at the end of the 19th century. London was the destination for extraordinary treasures which were the envy of the world, including elegant silks, bird-of-paradise feathers and exotic spices. Penhaligon’s As Sawira is a unique fragrance expression of this fascinating place and time.