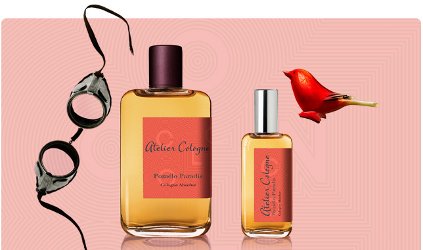 Atelier Cologne's new(ish) Pomélo Paradis is the brand's latest citrus fragrance, and reportedly the last scent in what is now called the 'Collection Originale'. Like its elder siblings Grand Néroli and Orange Sanguine, it's meant to provide the "magical freshness of cologne coupled with the lasting power of eau de parfum". Not a bad calling card, but I admit I am a bit less taken with the concept as time goes on.

I bought small bottles of Grand Néroli and Orange Sanguine shortly after they launched, but ended up giving them both away over the past year. Both are well-made, respectable renditions of the materials in question, but I almost never reached for them, and when I did, my usual tendency was to layer them with something else. Despite the decent lasting power, most of the fun was concentrated in the top notes, and I found that I owned other, similar citrus perfumes that were far more enjoyable to wear.

The top notes of Pomélo Paradis are great fun if you're a grapefruit fan (ok, it's supposedly pomelo, but I defy anybody to tell the difference, blindfolded, as a perfume note). It's a juicy mix of orange, pink pomelo and blackcurrant, with sparkle and energy to spare. It's got a lovely green bite to it, almost like lime peel, and a touch of an aromatic edge. The orange blossom and a faint whisper of mint come through in the early stages, when it's still got some verve going on (the notes: mandarin, blackcurrant buds, orange blossom, rose essence, mint, amber, vetiver and iris). After that — at about, say, the 30 or 40 minute mark — for me, it's all downhill. Everything fades, including the orange blossom, and what's left in the dry down is a pale, thin, amber-y musk, rather flat. It does last, mind you, but the thrill is gone.

Verdict: As soon as I smelled Pomélo Paradis on paper, I was tempted to add the small bottle to my collection. I'm glad I took a sample home and lived with it first. To my mind, Atelier's Mistral Patchouli is a better grapefruit (and a better citrus fragrance in general); Pomélo Paradis is a contender for Erin's Great Moments in Top Notes.

As near as I can tell, almost everyone liked Pomélo Paradis better than I did. The Candy Perfume Boy reviewed it today, and he has a coupon code for Atelier in case you're planning on doing some shopping.