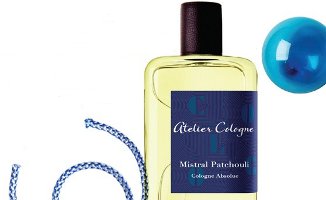 Patchouli haters — I used to be a card carrying member of the club — are probably not so numerous as they once were. Some of us perfumistas were undoubtedly desensitized by frequent exposure over time. But it's also true that there's just not so much to hate any more, now that "patchouli" invariably means a patchouli fraction, in which all the difficult bits have been removed via the wonders of modern science; these days, as often as not patchouli is virtually indistinguishable from other dry woody notes.1 If you were born long after the days of head shop patchouli oils (and have somehow managed to bypass Thierry Mugler Angel and its many spawn) and your only exposure to patchouli came from recently launched department store fragrances, you might wonder what all the fuss was ever about.

Atelier Cologne's latest, Mistral Patchouli, belongs to this brave new world of patchouli. It's not just that it's a relatively sheer fragrance, in keeping with the brand's concept of the "magical freshness of cologne coupled with the lasting power of eau de parfum", but that there's nothing earthy or musty or heavy or otherwise demanding about the patchouli. It's a patchouli for patchouli haters, and by the same token, anyone hoping for a decent patchouli-fest is likely to be disappointed. For some, the bigger "problem" note in Mistral Patchouli might be the grapefruit, which is ebullient in the early stages and at times teeters just on the edge of sweaty. On my skin, it never quite went overboard, and it mingled nicely with the pepper and star anise notes (also on the list: iris, incense, geranium, benzoin and vetiver).

The spiced grapefruit lasts well into the dry down, where you'll also find a very clean and mostly dry sort of patchouli. In keeping with the backstory,2 there is the vaguest of vague hints of salty sea — it's a cool, minty sort of effect more than anything; Mistral Patchouli is not a conventional aquatic. I am guessing the vetiver is a fraction as well, and it lends a slightly greenish touch without any real earthiness, farther on still, a touch of iris smooths things over and gives Mistral Patchouli an elegant air, again, without smelling much like iris.

Verdict: I have never understood why brands are so eager to name their perfumes after raw materials unless the composition demands it, especially when the material in question is a turn-off to so many consumers. I don't think anybody would smell Mistral Patchouli and say, ah, a patchouli fragrance, nice! That said, it's beautifully done, and struck me as lively, chic, and easy to wear (unless you have issues with grapefruit). It might be my favorite from this brand so far. I did not fall head over heels, but I didn't fall head over heels for Grand Néroli or Orange Sanguine either and that did not deter me from buying 30 ml bottles of each — I'm always arguing for smaller bottle sizes, but it's just as well they're not universal as I find them awfully hard to resist.

Mistral Patchouli is marketed as unisex but leans slightly towards the masculine. The lasting power is good.

Atelier Cologne Mistral Patchouli was developed by perfumer Jérome Epinette. It is  available  in 30, 100 or 200 ml Cologne Absolue ($70 - $185). For buying information, see the listing for Atelier Cologne under Perfume Houses.

1. And of course, the same issue applies to many other fragrance notes as well, from florals to woods to spices to citrus. Newbies embarking on an expensive and arduous journey of learning individual fragrance notes might want to reconsider — I'm not at all sure it's worth the trouble.

2. The "story" of Mistral Patchouli: "Just as they could not stop the winds from blowing, nor could they stay apart any longer. They left everything behind, but they were together, fearless and free. They laughed in the sea salt air and shared a final moment on land before setting sail under the luminous blue sky."