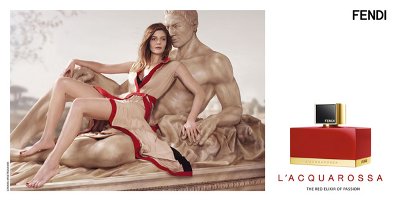 A very long time ago, March over at Perfume Posse wrote a line about perfumes that fill your head "with a deep, profound, Zen-like nothingness", and despite the fact that I can hardly remember my own phone number these days, that line stuck in my head. I quoted it at least once, also a very long time ago, and I think of it whenever I smell a new fragrance and my only reaction is well, yes, smells like perfume.

So you can probably already see where we're headed with Fendi's new L'Acquarossa, aka the "red elixir of passion". I had sort-of-middling hopes for L'Acquarossa — I do keep waiting for Fendi to do something as gorgeous as Theorema, and then put it in a bottle as lovely as Palazzo. But no, all we've had lately is Fan di Fendi, a fragrance that so thoroughly filled my head with a deep, profound, Zen-like nothingness that I cannot remember it at all, although I know I've smelled it more than once.1

Except now we have L'Acquarossa, too, and its bottle, while not so lovely as Palazzo, is reasonably attractive, and considerably nicer than Fan di Fendi — that bottle, I think, is nice enough, if rather Gucci-ish, but perhaps you could only love it if you were, indeed, a fan of Fendi. Anyway, L'Acquarossa is a woody floral. It's bright and citrus-y / berried in the opening, then a clean rose-y blended floral, not sheer really, but very much in the modern style: it's loud enough, but has none of the depth of a classic floral (the notes: mandarin, bergamot, plum, lantana, rose, orange blossom, magnolia, red cedar, white musk and patchouli). The lantana adds a bit of spicy almost-green to the later stages, and to my nose is the only real point of interest. The base is a middling-pale woody musk, and it's pretty clean too but I've seen worse. It seems to give out entirely far sooner than it should; it isn't short-lived, exactly, but it isn't very lively after the first hour either.

Verdict: there is nothing wrong, really, with L'Acquarossa, and it did not bother me to wear it. You could do worse. Then again, it did not call up any strong emotions either way (much less the color red, or any other color an elixir of passion might hope to be), and there's just something rather dispiriting about the far dry down, as though they got worried at the last minute and toned it down for mass consumption. "A fiery temperament illustrating the triumph of passion"?2 No, I think you'll have to look elsewhere for that.

Have a perfect fragrance in mind for a fiery temperament illustrating the triumph of passion? Do comment.

Fendi L'Acquarossa was developed by perfumers Delphine Lebeau (who also worked on Fan di Fendi) and Benoist Lapouza. It is available in 30, 50 ($83) and 75 ($98) ml Eau de Parfum.

1. Mind you, Fan di Fendi has some glowing reviews at MakeupAlley, even though only 38% say they would buy it again. But apparently my sentiments were with the reviewers who called it "just below mediocre", "some kind of generic Disney perfume that gets worse as it wears" and "like those 'Designer Imposter' style scents".  Or maybe not, I really can't remember. Apologies, as always, to all of you who love it.