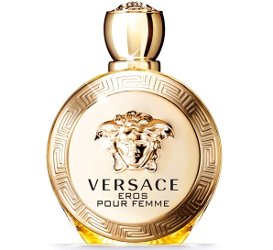 Versace will launch Eros Pour Femme, the feminine counterpart to 2012's Versace Eros. Eros Pour Femme is due to launch next month in Italy, elsewhere in 2015, and will be fronted by Brian Shimansky (who starred in the Eros campaign) and Lara Stone. Per Donatella Versace,

Eros is the God of love, but for the campaign for Eros Pour Femme, I wanted it to almost seem as if Eros himself was being seduced, such is the strength of the woman.