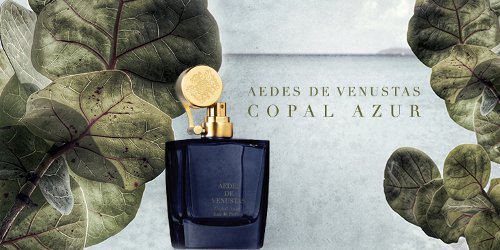 When Aedes de Venustas sent me a sample of their new Copal Azur fragrance, I immediately sent it to Kevin. Kevin (who some of you old-timers might remember used to review home fragrance here, including lots of incense) was not impressed. It did not, he said, smell like real copal. I wouldn't know from real copal; my experience is pretty much limited to Demeter Incense, which is advertised as having "a unique core of Copal". Send it back, I said, I think it smells great.

I include that story only to warn you that while it does, to me, smell great, Copal Azur might or might not meet any expectations you might have about a copal fragrance — remember our recent discussion of "realism" vis-à-vis the gardenia in Tauer Perfumes Sotto La Luna Gardenia?1 If you love incense in general, though, or if you've been a fan of the three Aedes fragrances that preceded this one (Oeillet Bengale, Iris Nazarena and Aedes de Venustas Signature), do give Copal Azur a try.

My worry about Copal Azur was not that it wouldn't smell like copal, but that it might be too fresh. Copal Azur was developed by perfumer Bertrand Duchaufour and inspired by a trip Aedes co-founder Karl Bradl took to the Mayan Riviera:

Karl Bradl was drawn to its scent while cycling on the coast of the Yucatán Peninsula through copal-laced air towards the natural reserve of Sian Ka’an, which translates as “Gate to Heaven”. The suave cloud of burning copal whirling over Tulum's bohemian and eco-chic outdoor locales at the foot of an ancient Maya walled city, confirmed his inspiration for Copal Azur.

The ruins of Tulum sit on a cliff above the beach. It's a gorgeous spot, if somewhat overrun by tourists, and the notes for Copal Azur reflect the location (minus the spring break cocktails and suntan oil): ozonic and salty notes (the ozonic part being the source of my worry), plus cardamom, patchouli, amber, frankincense, myrrh and tonka bean.

Anyway, I needn't have worried. Copal Azur is airy, yes, and the salty notes lend a pleasant seawater-y undertone to the blast of frankincense which dominates the opening. I don't notice the ozonic notes in particular, or else the combination of ozone and frankincense reads more to me like a crisp stone / mineral effect. There's also a thread of dark green woven through the early stages; as it dries down, the scent slowly sweetens and becomes warmer, more spicy-ambery. The final stages are softer and creamier, with a touch of vanilla and a velvety finish smoothing over the resinous notes.

Copal Azur is a lot of incense — if you don't like incense, I should think you can safely skip it altogether. Still, it's not churchy or brooding. I classified it immediately as an outdoor incense, a category in which I also include Comme des Garçons Ouarzazate, Sonoma Scent Studio Incense Pure and Tauer Incense Extrême, but that's really only accurate for the first half of its development. Later, it's more of an incense comfort scent (anyone remember Juozas Statkevicius Eau de Parfum?) and while I would call Copal Azur season-less, I have found it a particularly nice corrective for cold gray weather.

Copal Azur is unisex, and the lasting power is excellent.

Verdict: I love Copal Azur. It's my favorite of what Aedes has done so far, and I've liked them all. It went right on my buy list, but for me the price and size of the full bottle (the packaging is admittedly gorgeous) is a major disincentive. If I'm smart, I'll never buy 100 ml of anything ever again. What we really need is a coffret with travel sizes of all four, or alternatively, to be allowed to mix and match the purse spray refill sets. I'd buy one right away.

My disclaimer — Aedes is a long time advertiser at Now Smell This, and I'll just reprint the same footnote I used when I reviewed the last two Aedes fragrances.2

Aedes de Venustas Copal Azur is available in 100 ml Eau de Parfum ($245) or in a purse spray with three 10 ml refills ($195, or $110 for just the refills). For buying information, see the listing for Aedes de Venustas under Perfume Houses.

1. And I'll also add that the press materials for Copal Azur say specifically that there is no copal in the materials: "Since copal resin cannot be used as a perfume ingredient, three different extractions of frankincense are used to conjure it from top to base notes, making up an extravagant 30% of the formula."

2. Just to clarify, we don't take direct advertising from perfume brands for precisely this reason — I'd rather not be in the position of reviewing products made by our advertisers. Since some retailers have started introducing their own branded perfumes, and since I also don't want to ignore great fragrances, which are after all few and far between, here we are. But I will readily admit that if I didn't think Copal Azur was wonderful, I probably wouldn't review it at all, so in that sense, I think you can say that this isn't a totally objective review, if such a thing indeed exists.

5 perfumes: incense fragrances for winter
Perfume: the best of 2014