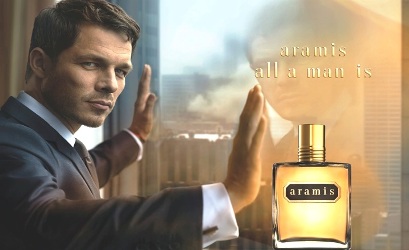 I've been meaning to review Aramis1 for years (it's a classic, and I've never tried it!) Reading two articles back to back last week, randomly, led me to the perfume counter for a fresh Aramis sample...and this review. These articles have apt connections to the “old-man” perfume that is Aramis (it was first released in 1964 and is regularly disparaged by men, and women, on perfume forums as being “old” fashioned and, thus, un-wearable today).

First up was an interview with Frances McDormand, talking about aging in The New York Times:

We are on red alert when it comes to how we are perceiving ourselves as a species. There’s no desire to be an adult. Adulthood is not a goal. It’s not seen as a gift. Something happened culturally: No one is supposed to age past 45 — sartorially, cosmetically, attitudinally. Everybody dresses like a teenager. Everybody dyes their hair. Everybody is concerned about a smooth face.

I have not mutated myself in any way. Joel [Coen, her husband] and I have this conversation a lot. He literally has to stop me physically from saying something to people — to friends who’ve had work. I’m so full of fear and rage about what they’ve done.

Frances and I part ways here; I could care less if others inflate their faces with fillers to the point that their heads resemble basketballs. And if someone prefers blonde hair to gray? Go for it. (I’m betting some of her “mutated” friends will think twice before accepting a dinner invitation from the Coens! And some of The Mutations may themselves think, when looking at Ms McDormand: “God, Frances…at least use some retinol!” All's fair when criticism of one's looks is concerned.)

The second article I read was in GQ: an overly-fawning interview of Roja Dove (conducted by a guy who knows nothing about perfume). GQ must have a rather unlearned/uninitiated readership…so many GQ articles are written in this style of "XYZ for Dummies" — in this case, the topic is perfume. In the article, Dove names "Five Scents That'll Drive Women Wild"; they are — Santos de Cartier, Chanel Antaeus, Terre d’Hermès, Roja Parfums Reckless Pour Homme, and today's subject, Aramis.

The Dove article led me to many comment streams off GQ’s website and the overriding theme was: "what does an old gay man know about driving women wild?” (The article gives Dove’s age as 58.) Again and again, the word “old” was used as an insult (and nothing makes me want to go into a rage à la McDormand more than people using words like “old,” “ugly,” “fat” and “poor” as put-downs. Earth to perfume trolls: lots of “old” gay men run the fashion, design, perfume and high-tech worlds, producing products that not only drive women wild, but men, too.

Aramis is 50 years old (so its first wearers are now, probably, 68 years old and up); and just like being a middle child, being middle aged in the perfume world puts you at a disadvantage in 2014. Lots of perfumes still exist from the late 19th century and early 20th century and are beloved and in lucrative production. Perfumes from the 1960s through the 1980s…well, they come with baggage (in many instances, suitcases, trunks and cargo holds full of strong aldehydes and powerful oak moss). The Aramis I’m reviewing is "basic" Aramis as it exists today...no doubt reformulated many times since 1964. 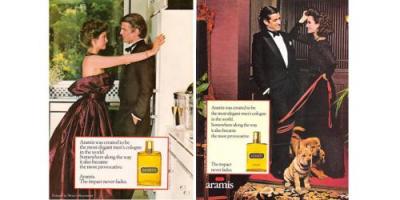 Aramis opens with a burst of warm citrus and cool aldehydes, accented by oak moss. I've read about the notorious manly, armpit aroma that older versions of Aramis possessed; today, there is still a fleeting masculine skin/sweat note in Aramis’ mid-development, but this note or accord says the Aramis man may have exerted himself through a long day, but that day certainly started with a shower and maybe some sandalwood-scented talcum powder on his armpits. The current version of Aramis, to my nose, has no cumin/raunchiness.

Light clove, accompanied by a sweet herbal bouquet, appears in Aramis’ heart notes, and the spices have a leather-edge. Like many of the older Estée Lauder perfumes, there is an “elixir” vibe about Aramis…nothing here is light and airy, super-clean or simple…there’s density and complexity — but nothing weird is going on either. A meaty sage note leads to Aramis’ base: a rounded accord of woody notes (patchouli and vetiver are discernible) with a tad more moss (but this time it's a bit smoky).

Verdict: Aramis does not smell like any perfume being made in the last 25 years. Men in their 20s and 30s (and perhaps their girlfriends) are used to fresh, clean, sporty fragrances, perfumes with a synthetic vibe that broadcast themselves far and wide. Who cares if these fragrances smell like candy, shampoo or detergent? Aren’t those nice smells? (And come to think of it..."youthful," too?)

I like Aramis. But as I've admitted in the past, I enjoy oak moss light and smooth and coy…I don’t like it to dominate a composition.  That said, I think adventurous men and women — of any age — should give Aramis a try; it’s a landmark of sorts in masculine perfumery. Thinking of dear "old" Aramis led me back to McDormand, whose words can, if tweaked, just as easily be applied to a venerable perfume as to an older person:

Looking old, she said, should be a boast about experiences accrued and insights acquired, a triumphant signal "that you are someone who, beneath that white hair, has a card catalog of valuable information."

Aramis is available in drugstores, department stores and at online perfume discounters.