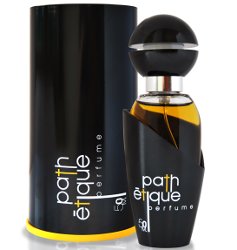 Pathétique is much more than just a fragrance: it is an art project where the smell is an olfactory synthesis, that can be reached through the various expressive forms and languages that, while staging the pathetic to its maximum, finally manages to overcome it, to revive the creative research in the artistic perfumery.

Extraordinary, out of box – in one word: unique- like all the fragrances created by Angelo Orazio Pregoni for O’DRIÙ – Pathétique is out of any olfactory schemes, offering the originality and continuous evolution. [...] Pathétique, therefore, is not described by listing its ingredients, but through the path that led to its birth. Creating it, Pregoni has played with “the fashion trends” of the contemporary marketing (particularly social media and viral connections phenomena) to desecrate his own world to which he belongs, bringing to the scene and demolishing manias, narcissism, presumptions and out of control stardom. He did all this by implementing a split self, alienating “the pathetic” part of his ego and then interpreting it, that is how Gian Clod, the phenomenal Nose, discoverer of the “goat’s blackberries”, the fictional main fragrance ingredient, was born; then Alessandroecarlomagno, P.R.; the dog waher GustaVino and all the other quirky characters, that make their outline, all this unlikely and parody-like “dynasty” with its familiarities to a third-rate soap opera. This sui generis company, plagued by the pompous ignorance of its management, presents itself in a very pathetic way, adopting the most absurd marketing strategies.

Playing the characters of this small world and getting his hands and his imagine dirty without any fear, the odd Nose of O’DRIÙ unmasked the pathetic “real” perfumery with its inner workings and its whole vainness. At the end of this, paradox in another paradox, there is Pathétique - Performance Perfume: in spite of its name and of its fictional creators, it is an astonishing beautiful fragrance and a whole sincere one too.

That’s why Pathétique is also “Path Ètique”: “Ethic Path”. The “performance” in the payoff is indeed that one of a perfume that keeps its promise – finally! – not only the on-line Pregoni’s performance...