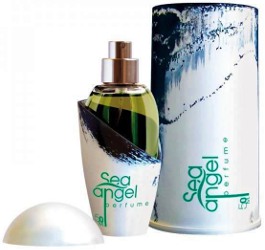 A new fragrance of “Angel” range is born, another stereotype of perfumery is reversed: this time Angelo Orazio Pregoni interprets his provocative and irreverent way the fragrances “sea-inspired”. The aim is one more time to reveal and neutralize the banality and dullness the fragrance market has accustomed its audience to: the Italian fragrance creator astonishes and floors his fans as usually he does, creating something really audacious and “marine” in a different, but undoubtedly.

Sea Angel is not just a name: it’s the key that opens the lock of a chest lost in the dark sea abyss, and over there long forgotten. Angelo Orazio Pregoni is the only that knew this chest and where it was. Once he opened it, a fluid, untouchable entity releases, expands, blends itself with what is around, moving between mermaids and other sea creatures, and sudden light glares that plough the darkest abyss. Deepness spirit that brings thousands, charming and terrific marine suggestions, becoming their messenger, or “Angel” indeed. The sea is represented in its intimate, wild and amazing nature, beyond graceful but fake marketing stories.

[...] Sea Angel is born to tell a truth: that one of the sea with its olfactory sensations, beyond the curtain of fake perfection and pleasantness of “marine” fragrances that invaded the market. The olfactory dynamics is changing intentionally: a wave breaks on the rocks and gives off splashes, so powerful spurts full the air with a strong seaweeds smell. Then, as after the wave retired, they leave the scene to more elusive feelings, that join deep and outside, darkness and light, that express the dead calm of the sea and, just a second after, a furious storm offshore, the pleasantness of the saltiness and the disturbing sensations of salty lymph too.