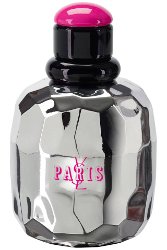 Yves Saint Laurent reinvents the rose in this daring combination of sweetness and provocation. A modern new fragrance that tells the story of contrasts, fusing original notes of tomato with feminine Rose Absolute.

Paris Rebel was developed by perfumer Loc Dong, who noted the difference between Paris Rebel and the original Paris:

Both fragrances are based on rose flower. The original PARIS evokes a romantic city and its rose absolute is sublimated by a powdery violet accord. However, PARIS REBEL COLLECTOR reveals a vibrant facet of the city, illustrated by the original combination of the rose absolute with notes of tomato leaves that bring a green freshness. The dry-down notes of this new edition are also quite different from the original one, offering a new woody vibration.