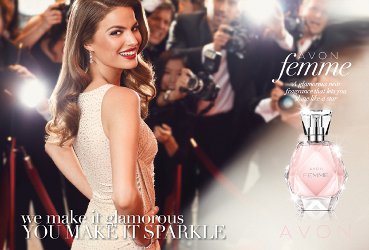 As long as Rochas Femme is still on the market, it takes a lot of moxie to name another fragrance “Femme.” When I think of Femme, I envision Edmond Roudnitska’s creation and an elegant yet curiously raunchy perfume that suits a woman of singular character. This Femme ignores focus groups and cleaves to an artist's  imagination. The Femme woman stands out today for her sure — if unfashionable — presence, and although opinions might be mixed, you don’t forget her. What’s Avon going to do with that?

“All eyes will be on you in this glamorous silhouette of rich jasmine petals and stunning magnolia touched with radiant amberwoods,” the copy on the Avon Femme sample’s folder reads. Additional notes include pink grapefruit, violet, plum, wild orchid, peach skin, musk, and woody notes. Hmm. Peach skin and plum. Jasmine. The wood and musk that some perfume houses use to simulate oakmoss. Could Avon possibly….?

Nope. Avon Femme is worlds away from Rochas Femme. If Rochas Femme is a risqué knockout with velvet-draped cleavage but manners to please the queen, then Avon Femme is a clean, efficient, and pretty suburban woman with a crisp Chardonnay in the refrigerator, a full calendar buzzing on her smart phone, and a living room of Pottery Barn furniture. I don’t mean to suggest that Avon Femme needs to be Rochas Femme, but I do want to point out the differences, lest your mind drift the way mine did.

Avon Femme is an aldehydic floral firmly rooted in the migraine-inducing (at least, for me) woody musk that is so popular these days. The woody musk jumps to the forefront from the first spray, with icy plum, peach skin, and generic flowers in the background. The woody musk stampedes over any “jasmine petals” or “stunning magnolia” that might lurk in Avon Femme’s composition. As the fragrance wears over the next four hours, it sweetens slightly, but otherwise hangs tightly to woody musk as it fades. Basically, if a woody musk soliflore existed, this would be it.

And now a note about “woody musk.” I’m not a fragrance professional, so all I can do is offer you my view as someone who loves wearing perfume and who wears a lot of it. Over the past four or five years, department stores fragrances seem to have latched onto woody musk and made it a centerpiece in many of their new launches. On one hand, this woody musk isn’t sweet or pandering, and it might ground certain perfumes, much like oakmoss did in the old days.

On the other hand, the woody musk is sharp, hints at something the Orkin man totes to ward off cockroaches, and instead of providing a cloud-like cushion for a composition as oakmoss does, it stabs the fragrance through in a really intrusive way. It’s like adding too much tarragon to a dish — you can’t appreciate the rest of the entrée. Plus, it’s dated! Before long, people will sniff something loaded with this type of woody musk and say, “That is so 2009.”

If I were in charge of orchestrating Avon Femme, I’d draw from Avon’s rich history and aim for a perfume that is classic, comfortable, and engaging. It wouldn't have to break new ground, but it would need a definite signature. I’d draw inspiration from all those Avon ladies who, through the years, visited their neighbors and heard intimate stories of their lives and knew who favored a coral lipstick to remind her of her honeymoon in Maui in 1961 or who feared aging but whose personality embraced all the enthusiasm of a teenager. I’d toss Avon Femme’s trendy woody musk accord aside and ask a perfumer to create something to warm the heart of both the granddaughter and grandmother of today’s Avon customer. Something authentic, not trendy. Authenticity will always be in style.

But I don’t have a network of stockholders to please, either. In the meantime, I guess I’ll take my favorite Femme, Rochas Femme.

Avon Femme Eau de Parfum is $30 for a 50 ml spray bottle. It’s available on the Avon website, along with matching bath and body products.