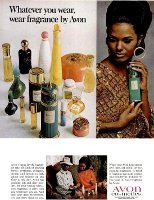 In 1960, Avon launched a perfume it called "Unforgettable". By 2011, it had forgotten all about it. "It is a very, very old fragrance," the polite Indian gentleman with the unlikely name of Fabian told me on via Avon's customer service phone number. "It has been wiped from the database."

"Someone must have records on it somewhere," I told him. "Do you think you could get me the phone or an email for Avon's PR firm?"

"Just a moment, ma'am," Fabian said. "I will see what I can do." While I waited I fed the cat with my free hand and started stripping the bed for the wash. I didn't have a lot of confidence even if he did come through with a contact number that Avon's public relations people would be very helpful. In my experience, PR firms for niche fragrances are really responsive, but for the big boys — Estée Lauder and Nina Ricci, for instance — Now Smell This's million-plus monthly page views don't seem to mean a lot.

Fabian was back. Skirting my request for a contact in public relations, he said, "Thank you for waiting, ma'am. I tried very, very hard to get information about Unforgettable, but it is very old. It was wiped completely from the database." Well. Unforgettable indeed.

Good thing I have my Avon Fragrance Demonstrator from the early 1960s. The Demonstrator is a set of ten, one-dram samples of fragrances in a slender pink and gold box with "Whatever You Wear, Wear Fragrance" emblazoned across it in script. Inside is a card with a quick description of its fragrances. For Unforgettable it says: "Magnificent floral composition/undertones of moss and wood notes/Romantic as favorite yesterdays, exciting as tomorrow!" It's the only fragrance description that rates an exclamation point.

Unforgettable got the most use in the Fragrance Demonstrator and its dram bottle is only half full. Thanks to Goodwill, I have a three-ounce cologne in one of Avon's pink, rubberized spray bottles with a gold collar and cap. It was so charmingly retro that it's the only perfume I've bought solely for the bottle.

To me, Unforgettable smells like an aldehydic floral-woody chypre. Thinking it smelled familiar, I pulled out my bottle of Millot Crêpe de Chine, and they're similar, except that Unforgettable is less woody, more rosy, and more powdery with a hint of musk. It smells clean and feminine and smacks of good old-fashioned perfumery. Unforgettable's drydown shares the almost clean, mineral smell I get in chypres Molyneux Quartz and Estée Lauder Azurée.

It makes sense to me that Avon might capitalize on the popularity of certain perfumes by making similar fragrances. I don't know when Unforgettable was discontinued, and I suspect it lived a healthy life, but when it came to light in 1960, perfumes of its kind were already a dying breed. Crêpe de Chine itself was discontinued eight years after Unforgettable's launch. The crisp green chypre was on the vanguard.

I don't think I'll wear Unforgettable much, but the cologne spray is so nostalgic and fleeting I like having it around to wear when I watch late 1950s movies or sort through the tangles of costume jewelry in my vanity.

Avon Unforgettable is discontinued, but if you keep an eye out, you'll find it at yard sales and in thrift stores everywhere. If you're lucky, it might even come in a bottle shaped like a poodle or a parrot (the head is its lid).