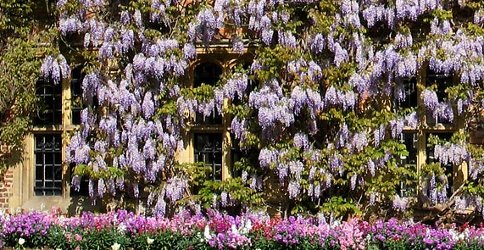 Wisteria Hysteria is the second fragrance from British milliner Stephen Jones, working in collaboration with Comme des Garçons. I liked the first, 2008's Comme des Garçons + Stephen Jones, enough to add it to my buy list but not enough to actually buy it: it's among the many perfumes I would buy if I ever found it at a massive discount. Wisteria Hysteria — what a great name! — costs a little more and I like it a little less, so it's not likely I'll ever own it.

The first fragrance from Stephen Jones was meant to be a "violet that's been hit by a meteorite", but while the top notes were a little odd, in general I found it more wearable than the description might imply. Wisteria Hysteria tones down the oddness several notches while staying just inside the Comme des Garçons aesthetic: it's basically a incense-y, wisteria-ish abstract floral from perfumer Nathalie Feisthauer. The opening is very peppery and a little closer to carnation than wisteria,1 although the clove is too light to make it anything like a real carnation (the notes: pepper, clove, frankincense, white wisteria, rose, mate leaf, musk, styrax, benzoin and amber).

The heart is more of a blended floral, and as I said above, it's wisteria-ish, sorta-kind-of — anyone looking for a realistic wisteria soliflore will have to go on looking.2 There's some pale rosewater, and maybe some peony or some other light floral, and just a whisper of the mate leaf; it's more sheer than not. The base is a pale, slightly metallic blend of clean incense and clean musk — it's a good fit with the opalescent white bottle (see below) and the white and silver color palette of the film.

I believe it is being marketed as unisex, but in the conventional sense (which of course, nobody need care about) it's probably feminine, certainly more so than the original Stephen Jones fragrance. I found the lasting power reasonable enough for an Eau de Toilette.

Verdict: Wisteria Hysteria is a pretty, spring-like floral, very wearable, but to my nose, ridiculously overpriced at $165 for 50 ml — and if it was twice the juice for the same price, I'd still think it was too much money for what it is.3 The packaging, admittedly, is lovely. Price aside, I do like Wisteria Hysteria, but as I said above, I liked the original Stephen Jones scent better (and found it more interesting). Wisteria Hysteria is bound to find fans, but I would guess that I won't be alone in thinking it too tame for its name and far less daring than the film. 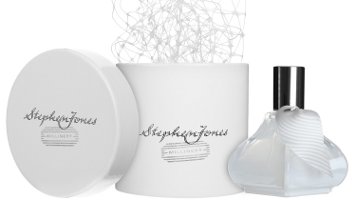 1. "I have a huge wisteria hanging outside my house,” said Jones, who explained its flowers in August give off “the most amazing kind of carnation peppery scent; that was what [the fragrance] was really based on.” Via Women's Wear Daily, 3/5/214.

2. And I was going to add that looking for a realistic soliflore from Comme des Garçons was probably a waste of time anyway, but then I remembered Series 2: Red / Carnation, which is pretty much a realistic soliflore, or at least, it used to be. I don't know what it's like now with the new restrictions on clove. And there was also a Rose fragrance in Series 2 — that's one of the only Comme des Garçons fragrances I've never tried.