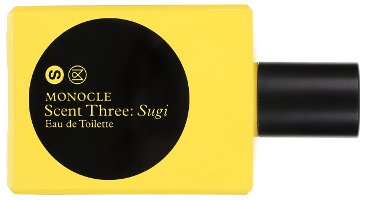 I've complained already about the recent output from Comme des Garçons — they've become a kind of go-to house for variations, sometimes minor variations, on wood and/or incense.1 Mind you, they know how to do wood and/or incense, and in all truth, when they do break out of that rut, I don't always like the result.2 So I have mixed feelings about their most recent launch, Scent Three: Sugi. It's their third fragrance in collaboration with Monocle magazine (see Scent One: Hinoki and Scent Two: Laurel), and like the others, was developed by perfumer Antoine Maisondieu. And I do love it. It's beautifully done, and I'd very much like to have a bottle — please, Santa, send the other two Monocle fragrances while you're at it! — but unless you have the sort of never-ending interest in woody fragrances (and Comme des Garçons) that I do, you might not find it an absolute must-try.

I'll start by repeating the press stuff, because it's spot on:

Sugi – also known as Japanese cedar – is popular as an ornamental plant in Japan and has a delicate, clean and energising fragrance...It’s a refreshing unisex scent that’s light but sophisticated, beginning with top notes of Mediterranean cypress and pepper from Madagascar, followed by iris from Florence and cedar from Virginia, and finished with pine and Haitian vetiver.

That's just what Scent Three: Sugi is, a refreshing unisex scent. The opening, admittedly, is a bit rough — camphor! — but that doesn't last for more than a few minutes, and after that, it's a bright woody fragrance, fresh and sporty in the old fashioned sense: lively, no skank to speak of, but no synthetic fresh notes either. There is plenty of pine, cedar and cypress, but it's far milder than that makes it sound, and the iris smooths everything over without adding more than a gentle dusting of powder. Light, sophisticated, delicate, clean, energizing...yep, exactly.

Verdict: I already gave it away in the opening — I love it. It's relatively quiet once it calms on skin, but it's one of those scents that catches you unaware during the middle of the day when you've forgotten you're wearing fragrance, and suddenly realize that something smells great. Still, if you're looking for a big statement fragrance, Scent 3 will not suit. It holds up well enough in the cold, though, and I would think it would also be a perfect alternative to a citrus cologne in hot weather. If I had to rank the three Monocle scents, I'd probably pick Hinoki first, then Laurel, then this one, but I'd rather just have all three and not have to worry about which is best. And the bottle is fabulous. Here's hoping Monocle keeps at it, and sticks with Antoine Maisondieu.

2. Notably, Amazingreen (2012), which I thought I'd love, and A New Perfume (2011), or whatever it's really called. A New Perfume was at least satisfyingly weird. And I hated Comme des Garçons + Undercover Holygrace & Holygrapie (2010).