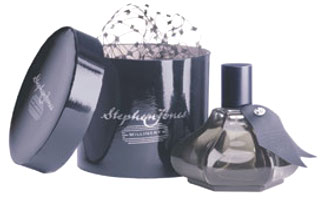 I don't do hats, so I know next to nothing about British milliner Stephen Jones. The Telegraph says "he is the best in the business"*, and I'll have to take their word for it. Jones reportedly met designer Rei Kawakubo of Comme des Garçons by chance in the Anchorage airport back in the 1980s**, and they've collaborated (on hats and whatnot, presumably) since then. The Comme des Garçons + Stephen Jones fragrance debuted earlier this year, and Jones' description of the scent — "futuristic but rococo" and "a violet that's been hit by a meteorite" — along with the perfect, just-like-a-hat packaging, placed it at the top of my "must smell" list.

The juice was developed by perfumer Antoine Maisondieu, who also did the wonderful Comme des Garçons Hinoki fragrance for Monocle magazine earlier this year, and I'm happy to report that it's exactly as advertised, in fact, if "a violet that's been hit by a meteorite" appeals to you, you'd probably do just as well to stop reading now and get yourself a sample. It's an iris-y sort of violet, very dry, over what could quite reasonably be described as the smell of smoldering space rocks, with perhaps a bit of scorched wood thrown in for good measure. If you want another description, Tania Sanchez called it "Chanel No 22 with a top note of fried green peppers and overheated inkjet printer"***, and that works too. The notes, if that helps, are violet, violet leaf, 'synthesized cyber aldehyde', clove, carnation, rose, jasmine, heliotrope, gaiac wood, magma, black cumin, vetiver and amber.

It's a little offbeat — it's exactly the edgy sort of violet I was hoping for when I reviewed Maisondieu's decidedly not edgy violet, Van Cleef & Arpels Féerie — but I don't think it's overly weird or difficult to wear, and once it dries down and the aldehydes have a chance to calm, it's softer and smoother, with more of a floral character. Still, if you're looking for pretty (or feminine), you'd be better off with the Féerie, or some other violet altogether. Personally, I'd love to have a bottle of the Stephen Jones, but as usual it's priced a bit outside of my range, especially given my already ridiculous perfume spending this year.