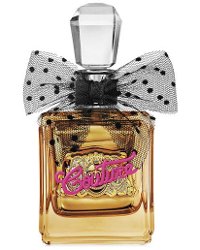 Couture overdose. She is couture all the way. Spinning an addictive web of glamour and decadence at the center of her golden world. For her, all that glitters is gold. Her fragrance, Viva la Juicy Gold Couture. A decadent rendition of Viva la Juicy that indulges the senses with luscious wild berries, a kiss of honeysuckle and a luxurious elixir of golden amber, melted caramel, and vanilla.