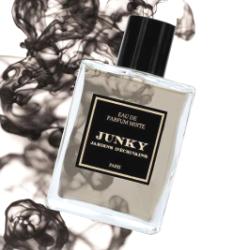 Inspired by William S. Burroughs' novel Junky, Jardins d'Écrivains describes its Junky* perfume as "unashamedly different and (it) invites originality and 'factualism' — to borrow the term used by Burroughs." Gray-colored juice is certainly something you don't see every day either.

Often, the name of a perfume and its advertising images do not match what's inside the perfume bottle. With Junky,  Jardins d'Écrivains has gone all out (factualism!) and Junky smells like a junky...an old-school junky to be precise.

On my skin, Junky begins with the scents of old cigarette/marijuana smoke absorbed into stale clothes, clothes that have remnants of the wearer's dried sweat and last-worn perfume (applied long, long ago). These aromas are masculine (I can't imagine a woman wearing Junky). When smelling Junky up close, with concentration, I detect hemp, some galbanum, violet leaf and "smoke;" in mid-development, the embedded men's cologne accord is prominent and most likely produced by violet leaf, cade and a blurry floral note (this perfume-within-a-perfume phase is the "old-school" part of Junky).

Junky's distinct notes disappear and a sweet, fuzzy accord takes over for awhile — a bit off-putting, strange, medicinal. As the perfume develops further it smells, for a moment or two, rather "skunk-y"; this funky/musky note ushers in Junky's last gasp of worn-out vetiver, abused moss and more smoke (this time faint frankincense). Added to these base notes is the fragrance of cheap soap (our junky is desperately washing up, spot bathing). The soapy note reminds me of the industrial/synthetic-smelling liquid soaps one encounters in gas station, ferry terminal and generic "public" rest rooms.

Do you think I hate Junky? Believe it or not, I find Junky fun and interesting...a character in a bottle. Does this mean I want to wear it? No. But kudos to Jardins d'Écrivains for making something ballsy in this year of (mostly) drab perfume releases. If you want to smell what happens to our junky after his overdose, proceed to Etat Libre d'Orange Sécrétions Magnifiques and the junky's hospital ER visit. The combination of these two perfumes should shock any junky-to-be into swearing off heroin forever.