For me, some of the best summer days revolve around lying on the sofa and reading, listening to music, (taking a nap), and eating and drinking indulgent concoctions (LOTS of gelato, ice cream and cocktails). I surround myself with vases full of scented flowers from the garden — right now there are sweet peas, roses, tuberose, plate-sized southern magnolias, gardenias, phlox, even tiny bouquets of spicy, bright orange marigolds. And, of course, I wear perfume.

For the past three weeks, Seattle has sizzled with temperatures often hovering between 89 and 93 degrees Fahrenheit (31-34 °C); on some days, it's been downright unhealthy to be outside, with smoke from raging fires reaching us from California, eastern Washington/Canada and...SIBERIA.  I feel zero guilt for whiling away a morning and/or afternoon "in contemplation." Today I'd like to introduce you to my most recent "Summer Quartet" (the individual parts change, but the pattern remains constant).

My idea of worthwhile summer reading never includes mysteries (loathe them) or 'pop' novels, though, depending on the subject, I might not dismiss a trashy memoir. Right now I'm enjoying Eugene Thacker's latest book: Infinite Resignation. The book jacket blurb says:

Composed of aphorisms, fragments and observations both philosophical and personal, Eugene Thacker's Infinite Resignation traces the contours of pessimism, caught as it often is between a philosophical position and a bad attitude. By turns melancholic, misanthropic and tinged with gallows humor, Thacker's writing hovers tenuously between the thought of futility and the futility of thought. 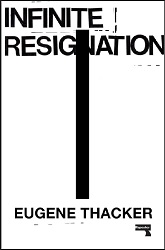 Some of my favorite excerpts from the book:1

...for me, the definition that best captures pessimism is given by the joke: 'I see the glass half full, but of poison.' [I had never heard that one before; I live in Seattle, after all, where everyone is always "FINE!" or "Doing great!"]

Lichtenberg: ‘It would be a good idea if some child would write a book for an old man, now that everyone is writing for children.’

In a café I saw two signs: ‘Seat Yourself’ and ‘Help Wanted’

I will pay extra to avoid bargaining.

...the pessimist is the person who looks both ways when crossing a one-way street; the pessimist, when faced with the choice between two evils, chooses both; the pessimist fears we live in the best of all possible worlds; if everything is going well, you've obviously overlooked something...

When you're alone, your voice sounds different. Vaster. More empty.

If there is anyone who owes everything to Bach, it is certainly God. (Cioran)

Thursday, 8:50 pm, late summer. Walking, standing, sitting, waiting, talking, looking, not looking... The suffocation of egos everywhere, a miasma of selfhood...(Must write this down, must get going, things to do...)

That 'suffocation of *fashion* egos' was probably why I chose this book for early August instead of what others might consider a more appropriate, and dishy, summer read: Loulou & Yves: The Untold Story of Loulou de La Falaise and the House of Saint Laurent by Christopher Petkanas. I'll get to that one in winter, when depression is part of the landscape and one more sad mud puddle won't send me falling face down.

Infinite Resignation also contains an informative section on The Patron Saints of Pessimism: “Kierkegaard: life is a tightrope; Nietzsche: life is a jump rope; Kafka: life is a trip rope; Schopenhauer: life is a noose; Cioran: life is a noose, improperly tied.” This book made me feel better...not worse; I laughed aloud quite often as I read it. What type of pessimist does that make ME? Normal? Fringe? Master?

Schopenhauer once  said: 'music is the melody to which the world is the text.' A perfect musical accompaniment to Infinite Resignation is Dmitri Shostakovich's 24 Preludes and Fugues for Piano, Op. 87. Ages ago, by pure good luck, I bought CDs of this composition performed by the Russian pianist Tatiana Nikolaeva; Shostakovich played the preludes and fugues to Nikolaeva as they were being composed, and he dedicated the work to her. She gave the world premiere performance in 1952 and received Shostakovich's praise for her first recording of the preludes and fugues in 1962; she recorded the complete work three more times — in 1987, 1990 and in 1992 (filmed, and watchable on YouTube). 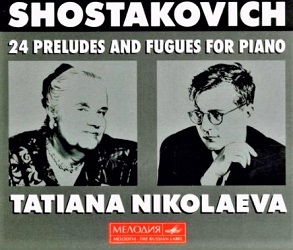 Nikolaeva endeared herself to me not only because of the beauty of her interpretations of these (and other) works, but because she seemed down to earth, hearty and in interviews often talked of scent memories. She said her childhood in the provinces, growing up in Bezhitsa, was infused with the smell and taste of apples and honey. Her father, a pharmacist (and amateur cellist and violinist), would gather music-loving friends (doctors, engineers) on Saturdays in his pharmacy and play the works of Beethoven, Mendelssohn, Tchaikovsky. Though they were not professional musicians and made mistakes, Nikolaeva said those afternoon performances instilled in her a love of music. No matter where she was in the world, she could never hear the quartets of Beethoven without thinking of her father and "smelling" the medicines that filled his pharmacy.

24 Preludes and Fugues for Piano includes works of great diversity: tender, enchanting melodies — happy and sad in character, moments of calm punctuated by strident surprises, simplicity, and mazes of notes that lead to a feeling of freedom or...closure. I often become emotional while listening to Nikolaeva's performances. If you're not familiar with these gorgeous Shostakovich works, watch Nikolaeva talk about her friendship with Shostakovich and listen to her perform selections here.

During a concert in San Francisco on Nov. 13, 1993, Nikolaeva was performing the 24 Preludes and Fugues when she suffered a cerebral hemorrhage. She died nine days later on Nov. 22 at age 69. 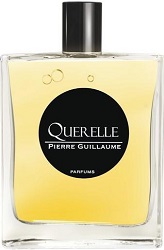 What does a piano smell like? Parfumerie Générale's Querelle2 comes close, if we're talking about a concert grand at least one hundred years old. Querelle has a musty/musky smell (black caraway mixing with a human/cumin-like aroma); its dense lemon, frankincense and myrrh remind me of waxed/polished wood, old felt, "fragrant" dust, and ivory piano keys impregnated with the vitality and scents of those who touched them. Vetiver and oakmoss (as well as the cumin) conjure a pianist, too, in intense performance mode, and these base notes lift the scent, like a delightful chord in the treble range, hit hard, and held till it fades. Querelle is one of my favorite summer perfumes; I'm on bottle No. 3. 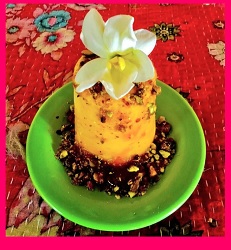 Finally, let's get to some cool kulfi made with Alphonso mangoes from India. Seattle rarely gets a shipment of Alphonso mangoes and the few shops that may get a box or two save them for staff and prized customers. I found this recipe in the New York Times and it uses canned Alphonsos (easy to find in well-stocked Indian markets). I can attest to this kulfi's creamy texture and luscious mango flavor. You can serve it as-is or top it like I did in these photos with ground pistachios over a syrup made with apricot jam and orange blossom water. (Putting a fresh flower on top adds another fragrant touch.)

Summer is going by way too FAST, so enjoy the warm days and bounty of the garden while they last.

The brief poll: do share your own favorite quartet (book, music, food and perfume) for the season.

Parfumerie Générale Querelle Eau de Parfum is €99 for 50 ml (it seems more widely available in Europe than in the U.S.) Infinite Resignation is $17.95. Tatiana Nikolaeva's 24 Preludes & Fugues for Piano, Op. 87 by Dmitri Shostakovich, Melodiya label, is $35 (3 CDs) at Amazon.

1. Infinite Resignation by Eugene Thacker, Repeater Books; distributed by Random House in the US; 2018.

Note: Top and bottom images of mango kulfi by the author.