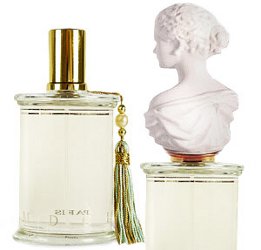 It’s easy to get spoiled as a perfume enthusiast. After smelling your way through niche lines, you may not even bother with department store offerings unless they’re by Hermès or Chanel or have been getting special attention by tastemakers. Before long, you might find you’ve become like the gourmet who complains about the overly dry truffles in his scrambled eggs, forgetting how many people can’t even scrape together the money for a bowl of oatmeal. Please keep this in mind as I tell you that neither Parfums MDCI Cuir Garamante nor Nuit Andalouse tempted me.

Nose Richard Ibanez composed Cuir Garamante. Its notes feature pink pepper, nutmeg, saffron, rose, oud accord, papyrus, leather, vanilla, labdanum, incense and sandalwood. Once the tingly top of Cuir Garamante wears down, a thick, funky leather with a touch of sweetness emerges — for about ten minutes. Then it’s as if the perfumer stood, hands on hips, in his lab and said, “What manly notes can I toss in?” Into the pot went every assertive note he could find (including what smells to me like a helping of pipe tobacco) to duke it out over the fragrance’s next few hours on skin. The leather is vanquished early on, and oud comes out on top.

Despite the mish-mash, Cuir Garamante doesn’t have a lot of sharp edges. Imagine something macho but refined, like Rocky Balboa, fresh from the ring, in a tuxedo. While that should sound interesting — I love a good high-low mix as much as anyone — I’m not sure it was intended, and I can’t quite get my head around what’s going on in this perfume. Cuir Garamante lasts a good five hours on my skin, and it has robust sillage even dabbed from a sample vial.

Nuit Andalouse (what a gorgeous name!) is a smoothly whipped bouquet of the softest, most velvety flowers. Its gardenia isn’t strident or sickly-fruity or buzzy. It’s calmed by summer flowers and as gentle as a breeze on a warm night. What stops the fragrance from seducing me completely is a slug of clean musk that reminds me too much of drugstore shampoo. Despite being so soft, Nuit Andalouse lasts all day on my skin and has moderate sillage.

Sure, I’d rather wear either of these fragrances than 99% of what’s on the shelf at Macy’s. But for the same money I’d choose other leather or gardenia fragrances or another perfume from the Parfums MDCI line. (Chypre Palatin and Enlèvement au Sérail are on my “when my ship comes in” list.) On the bright side, since I’m not wild about either Cuir Garamante or Nuit Andalouse, I’ve saved myself some serious money. Maybe I won’t have to count my pennies for that oatmeal after all.

Parfums MDCI Cuir Garamante and Nuit Andalouse Eau de Parfum are each $250 for 75 ml, or $375 for the bottle with the resin bust. For information on where to buy them, see Parfums MDCI under Perfume Houses.