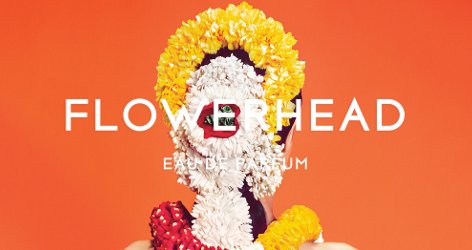 ..this project was sparked six years ago when I gave away my cousin at her Indian wedding, which was my first traditional Indian wedding. This fragrance was about capturing the idea of an Indian bride, rather than just the wedding and I called it Flowerhead, because it was really the fictional memory that I can imagine from my own Indian wedding. The idea of marrying someone you don’t know was very interesting. There’s anxiety and excitement, and I described this person as a ‘flowerhead’, because the bride is completely covered in floral hair arrangements. — Ben Gorham of Byredo1

Flowerhead is the latest from niche line Byredo, not a brand known, I don't think, for their florals, although they've done a few, including La Tulipe and the newer Inflorescence. Flowerhead got my attention in particular because it's centered on rose, jasmine and tuberose, three floral notes I adore. Plus, the Flowerhead visuals are lovely, and the idea of a fragrance inspired by flower garlands at an Indian wedding, what's not to like? So I tried not to be dissuaded by Gorham's statement that it was "done in a modern way" in contrast to most floral fragrances which are "old-fashioned and not modern and smell like grandma"2 — not exactly words to warm a perfumista's heart.3

Fear not, Flowerhead is modern, but it's not too modern. It starts big (almost big enough for grandma), with a burst of tart berries and citrus (the notes: angelica seeds, lingonberry, lemon, sambac jasmine, green notes, rose petals, tuberose, suede and ambergris). The opening floral notes are loud but not heavy; it's dewy and greenish and pretty, and very springlike.

As it settles, it quiets significantly, especially after the first 30 minutes or so (by which time the berries have gone their way as well). And it warms slightly, but never more than that: Flowerhead stays very much in springtime territory. The rose adds some fullness without calling attention to itself; the jasmine (at center stage) and the tuberose (off to the side) are done in a middle-of-the-road sort of way: this isn't a scrubbed-clean floral like La Tulipe, but Flowerhead is hardly a hothouse diva either. I did not find it even slightly indolic, but of course you might, depending on your tolerance for skank.4 The base is pale and mild and woody-musky, with just the vaguest suggestion of something like suede.

Verdict: Flowerhead is lovely. It's modern enough, but doesn't go so far as many modern florals (i.e. it doesn't smell like a dryer sheet or air freshening product). If you've never found your perfect spring floral, do give it a try. It's not going on my buy list simply because I've got this genre pretty well covered in my collection already. Still, I'd happily wear it if I had some.

If you want something modern but with a bit more floral punch, you might try Septimanie Perfumes Pavillon des Fleurs.

The poll: name a pretty spring floral you think everyone should try. 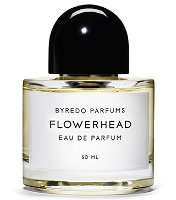 Byredo Flowerhead was developed by perfumer Jérome Epinette. It is available in 50 and 100 ml Eau de Parfum ($145 / $220). For buying information, see the listing for Byredo under Perfume Houses.

1. Via Cosmetics Business. The description at the Byredo website: "Flowerheads are strung together on giant leis, including Jaimala garlands which are exchanged between bride and groom as a token of mutual respect. Couples are often showered with petals by the groom’s brother for spiritual protection. Flowers are abundant; from the mandap wedding canopy, which is entirely covered in exotic blooms, to the spiritual pooja rooms and verandahs, the explosion of colour is wildly celebratory and the scent is overwhelming."

3. Or at least, perfumistas like me, who are hoarding their last precious drops of vintage Diorissimo and fearing the day when all we'll have left is modern florals.

4. More than once I've said something wasn't indolic, only to be told in the comments that I was crazy. My tolerance is pretty high. If yours isn't, try before you buy. You should always try before you buy anyway, right?