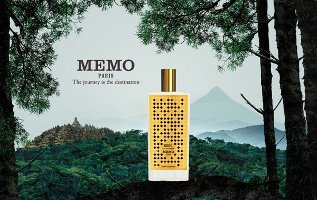 Memo is continuing its sensory journey with a new aromatic, vegetal, botanical and vibrant collection. Its source of inspiration? Seeds and their power of life. By exploring its passion for this essential womb, eternal ally and little natural gem that has lost none of its symbolic force, the brand is taking its desire for discovery and its appetite for creation up a notch further.

[...] Kedu, nicknamed “the garden of Java” in Indonesia, is a plain bordered by a volcano. Its soil, which has been made fertile by the ash, is sacred. Glossy green palm trees nonchalantly rub shoulders with one-horned rhinoceros, giant flowers in changing colours, prehistoric buffalo and bent-backed pilgrims. Borobudur arises shrouded in mist, a site of prayer constructed on a magical square. Tradition has it that you can purify your soul by throwing sesame seeds – one seed for each passion – into one of its flaming domes. The burnt sesame aromas rise up to the heavens. The husky accents of the seeds, which are symbols of longevity, set the sparkling freshness of grapefruit alight.

[...] Its primary ingredient – sesame, the symbol of longevity in Asia – is a magic incantation in and of itself; we long to murmur “Open sesame” on discovering this fragrance. And as it happens, the perfumer’s fine expertise was required for this ingredient to reveal all of its secrets. It unfolds on contact with grapefruit, neroli, white musk and moss to form an enchanting spell. Sesame and grapefruit come together and merge like the landscape that inspired them, the high plain of Kedu.