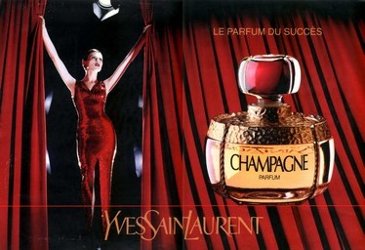 Every once in a while I open my perfume cabinet's doors and am overwhelmed by the rows of bottles crammed shoulder to shoulder like glass soldiers. When it gets to be too much, I start giving bottles away. Rochas Tocade is an example. I bought it at an online discounter ages ago, but it was so sweet that it annoyed me. I swapped it away not long after. Yves Saint Laurent Yvresse is another example. I told myself that liked it a lot, but I rarely wore it. When I met someone who liked it better, I gave it away.

Earlier this week I found both Tocade and Yvresse (in its earlier incarnation, Champagne) at Goodwill and snapped them up. It had been so long since I’d smelled either one, and I as soon as I saw their bottles I missed them. Well, I won’t be giving them away again any time soon. Instead of cloying, Tocade smells almost golden on my skin and is just trashy enough to be fun. Champagne’s nectarine is so much juicier than I’d remembered, and its abundant moss is a deliciously fusty contrast.

Over the past six months, I’ve had a good time "shopping" in my own perfume collection and rediscovering fragrances I thought I knew. Here are some examples:

Guerlain Shalimar: Shalimar was my big rediscovery last year. I was convinced I knew it inside and out, then after not wearing it for months I sprayed some on and POW! It’s a whole movie in a perfume — a movie with sepia-toned sets, peacock feathers, spies, and cocktails with lemon twists.

Caron Nocturnes: Nocturnes is easy to forget because it doesn’t shout. But it’s so soapy and pretty, and I never before noticed its soft veil of moss. This could be a perfect bedtime fragrance.

Annick Goutal Songes: Why didn’t I remember what a glamorous bombshell this one is? Underneath the vanilla and tropical flowers is a dirty note that gives Songes a retro feel and transforms it from Dolly Parton to Dorothy Lamour.

Annick Goutal Eau de Charlotte: Another Goutal that fell out of rotation years ago, but which seemed perfect for a cold afternoon a few weeks ago. My memory of it was chocolate and cassis and crackers — but in words, not fragrance. This time out, Eau de Charlotte’s freakiness grabbed me. For all the thickness of its description, the perfume is somehow also cold and sheer. I need to wear this one more.

Have you ever reached to the back of your perfume collection and pulled out a bottle you’d stopped wearing, and found something new in it?