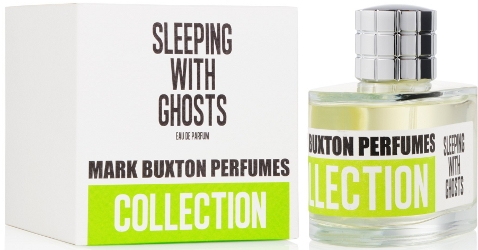 Sleeping with Ghosts, promoted by perfumer Mark Buxton as a "fantasy of extreme tenderness," is one of six fragrances in the recently repackaged Mark Buxton Perfumes collection. It includes notes of tagete, quince, peony, leather, vetiver and vanilla, and it is described as "seeking for the unexpected beauty...lost in the dark world...who is it?"

I like the names of the perfumes in this collection (Black Angel and Emotional Rescue are two others that appeal to me), and I wonder whether Sleeping with Ghosts borrowed its name from an album by alternative rock band Placebo. In a 2003 interview, Placebo frontman Brian Molko discussed "Sleeping with Ghosts"' theme of lost relationships, saying, "The album title's about carrying the ghosts of your relationships with you, to the point where sometimes a smell or a situation or an item of clothing they bought brings a person back. For me it's about the relationship that you have with your memories."

Despite the list of notes, I hoped that Buxton's Sleeping with Ghosts would somehow be an ethereal, wispy fragrance; I was wrong. This fragrance doesn't feel particularly dreamy or tender to me; then again, fantasies and beauty are all subjective, right? Sprayed on a blotter, Sleeping with Ghosts is very much wide awake, even hyperactive, with bursts of brightly colored, acidic citrus and some almost-cloying vanilla. (My husband, who rarely voices any opinion of the countless fragrances sprayed in our home, voiced his dislike.)

On skin, fortunately, Sleeping with Ghosts feels a little more restrained and much better-constructed. It's still an unusual mix of tart, sweet, bitter, and earthy notes, but they're more tightly meshed than I might have expected. The quince (described as "crispy quince" — why can't anyone hire an editor these days?) and tagete (marigold) make way for a dry leather heart, and the vanilla isn't exactly "luminous," but it's smooth and a touch woody, especially in the company of the vetiver. I'm not a fan of intensely leathery fragrances — they're just not my style — but I like the way the leather note of Sleeping with Ghosts endures and is balanced first by the fruit and then by the smoky-sweet vanilla.

Overall, Sleeping with Ghosts feels contemporary and androgynous. It's less complex and distinctive than Charenton Macerations Christopher Street, just to give an example of another niche fragrance with leather and citrus and an earthy-woody base; then again, as the Mark Buxton website tells us about Buxton's work, "The beauty of simplicity defines the essence of his creation and reveals a rigourous writing in his short and unforgettable formulas." I don't know that Sleeping with Ghosts is unforgettable enough to deserve such high pricing, but it does exude a feeling of upscale rock-and-roll romance. If that's what you're after, you could give it a try.