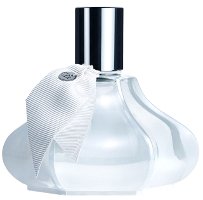 "I have a huge wisteria hanging outside my house,” said Jones, who explained its flowers in August give off “the most amazing kind of carnation peppery scent; that was what [the fragrance] was really based on.”

Wisteria Hysteria was developed by perfumer Nathalie Feisthauer. I will update with more detailed notes when I can.

Comme des Garçons + Stephen Jones Wisteria Hysteria is £95 for 55 ml; it can be purchased now at Show Studio.