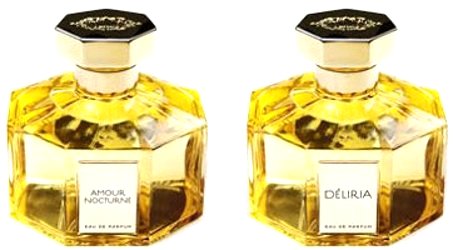 I admit it: sometimes I do feel an “explosion of emotions” when I pass a bakery display case. But I wouldn’t have thought a perfumer's rendition of an emotional explosion would give off so much brioche and baba au rhum. To me, that’s just what L’Artisan Parfumeur Explosions d’Emotions Amour Nocturne and Déliria do. They smell like sophisticated pastries steeped in liqueur — and for Déliria, sitting in a crimped foil holder.

L’Artisan Parfumeur released three fragrances in its Explosions d’Emotions collection: Amour Nocturne, Déliria, and Skin to Skin (which Robin will review later this week). L’Artisan describes the collection as “Three concepts, translating the extraordinary emotional power of fragrance, created without compromise, with master perfumer Bertrand Duchaufour.” They’re packaged in a larger, squat version of the perfume house’s classic columnar, heptagon1 bottle and cost an eye-popping $280 each.

So, what do we get for all that cash?

Amour Nocturne's listed notes are cedar, hot milk, caramel, gunpowder and orchid. This list of notes is so visual. I see a cedar tree, a porcelain pitcher of steaming milk (couldn’t possibly be chilled milk), a small copper pan simmering with caramel, a cooling pistol, and stems of yellow Cattleya orchids tinged with magenta. I’d love to see this painted by a Flemish master or maybe by a 1930s pulp noir cover artist. What Amour Nocturne smells like probably has been painted, but by Wayne Thiebaud. In style, it reminds me of the creamy-bready Arquiste Anima Dulcis without the alluring initial funk and with a dose of cedar.

Amour Nocturne starts off with an herbal kick that, I swear, hints of dill before diving into the gourmand territory of cream, buttery bread and tonka. Sharp, tangy cedar firmly cuts through what could otherwise be — and still will be to some people — a cloying composition. This is my favorite part of Amour Nocturne. Some perfumers might have been tempted to toss in raspberries to make Amour Nocturne easier to love instantly, and patchouli to ground it, and I’m grateful Amour Nocturne didn’t go that way.

The fragrance lasts a good long time on my skin. I dabbed from a sample vial, but I imagine the spray would give vigorous sillage. Still, $280? I’d go for Anima Dulcis instead to scratch that kind of perfume itch, but if you love a mouth-watering gourmand fragrance with an interesting twist, you should give this one a try.

Déliria's notes include metallic, rum and gourmand notes, plus toffee apple and candy floss. “Déliria” might be renamed "Deliriously Ill", judging from that list of notes. Thankfully, the fragrance isn’t as circus-friendly as its list of notes suggests. In a nutshell, Déliria is like eating a brandied cherry while holding an abraded silver spoon in your mouth. It’s sweet and fruity and insistently metallic.

Although Déliria stays in the dessert category with Amour Nocturne, it is cooler, less creamy, less buttery, and not as bready. To me, its fruit is all about cherries and not so reminiscent of apples. The fruit is secondary, though, to the cane sugar in which it’s steeped. Although the fragrance stays sweet, it also stays cool and liquid as it dries down, instead of breaking into a typical sandalwood-amber-musk you might expect (and fear). Déliria, like Amour Nocturne, persists on skin all day, even when dabbed from a sample vial. I can’t see myself wearing this one, even tongue in cheek, but a naughty debutante might feel differently. 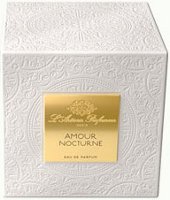