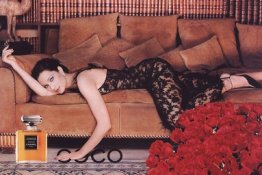 Just around the corner is Valentine's Day, and you might already be thinking about what scent you want to wear for the night out. Maybe you even want to try something new. I asked two fragrance experts, Amy Yang of Luilei in Brooklyn, New York and Lisa Slavik of Beautycafé in Plano, Texas, to weigh in on the best perfumes to wear on Valentine's Day. (Both stores sell over the internet, too.) Today's post focuses on the best scents for a full-bore romantic evening. Tomorrow we'll discuss the best scents for a tentative romance and for people who aren't in relationships but plan to go out and have a good time anyway.

For a romantic evening, Amy Yang recommends Tauer Le Maroc pour elle, which she says is "an incredibly sexy scent for a very intelligent woman — one who fully understands that the art of seduction is mainly an intellectual game rather than a physical one". She also loves Serge Lutens Chergui and Chanel Coco and Cuir de Russie, again for their blends of outright sexiness and intelligence. For a man, she recommends Tauer Lonestar Memories, "an incredibly masculine, pensive, and melancholy scent. It's a scent for a strong man who knows a little self deprecation is very sexy". Amy says that Lonestar Memories is terrific on women, too, because of the "contrast and confusion of it all. Your soul thinks it smells a sexy man but the your eyes see a sexy woman — incredible!"

Amy brought up another good point: If you plan to go out for dinner, you might want to consider that as you choose your scent. She says that The Different Company Sel de Vetiver is a great restaurant fragrance because "it is a scent with great personality and so it makes for good company, but it's not incredibly dense so it won’t interfere with great food, great wine, and great friends".

Lisa Slavik chose L'Artisan Parfumeur Patchouli Patch as a sure hit for Valentine's Day, and she says men compliment her on it all the time. It sounds like her real love of the scent might be for more personal reasons, though. "I first started wearing Patchouli Patch a few months ago, when the gentleman that I started dating was wearing a patchouli-based fragrance. Gawd, it was so intoxicating on him and I just couldn’t get enough of it or him." Patchouli also reminds her of her younger days and wearing an old boyfriend's shirt. "It's a very sensuous and intoxicating fragrance, and, well, there is nothing wrong in my book with having your neck nuzzled by that special someone, especially on Valentine's Day, no?"

To me, Valentine's Day is about celebrating a bond that, if you're lucky, you've shared with someone for a long time. The evening, then, is more about intimacy than sex, and Rochas Femme is all about intimacy. On a man, I'd love to smell Frederic Malle Musc Ravageur. Another fragrance choice might be to embrace the symbolism of the day and go with the scent of roses or chocolate — or both, in S-perfume 100% Love. Whatever perfume you choose, though, I can't think of anything better to breathe in than the smell of each other, maybe a fire, and the warmth of being together.