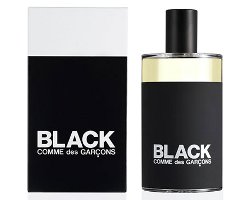 After a long dry spell in which nearly every new fragrance I smelled was either boring or just plain awful, late spring / early summer 2013 is turning out to be a good time for perfume, at least for me — there are so many winners it's hard to decide which to review next. I just about drew straws to come up with today's subject, Black, from Comme des Garçons. I'm especially thrilled about Black because Comme des Garçons is likewise a brand with which I have gone through a long dry spell. As a new perfumista they were one of my favorites, but I've been less than enthused about the last few years' offerings.

Black is a return to form of sorts — it's satisfyingly weird, and some people may find it less than suitable as a personal fragrance. And I cannot claim it is new territory for Comme des Garçons, quite the opposite: it's a woody incense, a theme they've explored in great detail already, and yes, as I expected, it's at least a little related to the Black Play fragrance they did last year, in fact, I'll start by saying that if you find Black to be just too much, try Black Play — it could be the Eau Légère / office-friendly flanker or something.

Comme des Garçons is calling Black "an emergency, guerrilla like, spiced-up new scent"  — language I found disconcertingly reminiscent to the not-so-exciting Guerilla fragrances they did back in 2006. Here, the claim is easier to justify. Black starts off with a highly aromatic whoosh of peppery incense and birch tar (the notes: black pepper, incense, leather, licorice, birch tar, pepper wood, cedarwood and vetiver). It's smoky and strong, with vague echoes of charred meat, and it's probably not something you'd like to encounter freshly applied on an elevator on a hot day in August. As it dries down, sheer spices and a touch of licorice add to the foody aspect, but it also gets softer, less insistent, and the incense calms to something a little less like Sunday Mass. The leather is soft as leather can be, and the licorice, while not heavy, is somewhat more noticeable in the later stages after the incense and pepper settle. It's more dry than sweet, and probably more masculine than feminine. After about 20 minutes, it's reasonably wearable, but still spicy and earthy enough to be interesting.

If Black is too tame for you, do try Olivier Durbano Black Tourmaline; someone reviewing Black at Luckyscent pointed out, quite correctly, that Black could be Black Tourmaline's "polite little brother".

Verdict: great fun, thank you Comme des Garçons. It's not going on my buy list, as I own enough incense to last me through several lifetimes and then some, but I'm awfully glad to have tried it, and I'd love to know who the perfumer was — if you know, do comment!