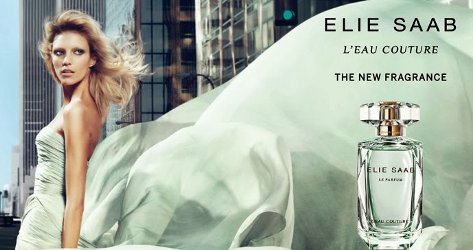 I hardly know what to expect anymore when I see “Eau” next to a perfume's name. Sometimes an Eau is simply an Eau de Toilette version of another fragrance, and it may be almost as assertive as its parent fragrance but more citrusy (think Cartier Le Baiser Eau de Toilette). But sometimes an Eau is a different fragrance altogether from its brand's namesake fragrance (L’Eau de Chloé). Elie Saab Le Parfum L'Eau Couture, flanker to 2011's Elie Saab Le Parfum, is a greener, lighter version of the original — a definite relative, but a different fragrance and much sheerer. Fans of Elie Saab Le Parfum should give it a try. I wouldn’t be surprised if some people like it better than the original.

L'Eau Couture was developed by perfumer Francis Kurkdjian, who created the original Elie Saab Le Parfum. L'Eau Couture's notes include bergamot, magnolia, orange blossom, green almond and vanilla. I also smell a hint of the woody musk that has been filling in the past few years where oakmoss might have once have played a role.

In a Women's Wear Daily interview with Nathalie Helloin Kamel, vice president of Parfums Issey Miyake and Elie Saab at Beauté Prestige International, Shiseido’s fragrance division, Kamel said, “We wanted to have a l’eau, but a l’eau that is balanced with something that is really linked to a fashion DNA, which is the reason why we created L’Eau Couture. It is really the encounter between the l’eau [fragrance] segment and the couture universe.”1 (I have no idea what that means, but I include it as inspiration for any of you working on your Prix Eau Faux entries.)

L’Eau Couture kicks off green and floral, and its orange blossom steps right up. Don’t dismiss it as another fresh orange blossom, though. L’Eau Couture’s green edge combined with wetter, more supple floral notes, bring the fragrance into a summer garden, giving it grace and wiping away any hint of gas station lavatory soap. A wisp of powder settles over the scent, and a musky-woody note grounds it and adds the touch of ugliness that seals its beauty. Vanilla weaves through L’Eau Couture as a slight but present thread.

L’Eau Couture runs through its paces quickly and fades into a faint wood, musk, and a curiously cinnamon-like jasmine-orange blossom tingle. It isn’t as evanescent (or cool) as, say, Hermès Jour d’Hermès, but if you find you like L’Eau Couture, you’ll probably want to buy the largest bottle and spray with abandon. Tuck an atomizer of it into your purse for later.

The original, Elie Saab Le Parfum, is a diva who trots orange blossom to La Scala and demands center stage, all while playing the virgin. L’Eau Couture is more quiet and fresh, but still pretty and just the tiniest bit challenging. It’s a real perfume, not just something that smells like it was ginned up to make quick sales to 20-somethings on payday. To me, L’Eau Couture smells a bit too mature for teenagers, but anyone older — up to and including your mother and grandmother — who wants a light, classic fragrance, and who doesn’t feel like she has to trumpet her sexuality in patchouli and purple fruit, will find room for it in her fragrance wardrobe and may even fall in love with it.

L’Eau Couture’s lovely yet conservative aura also makes it a safe bet as a gift for anyone who is used to perfume at all. For that reason, I think it will be popular, and I think it deserves it. (The same WWD article I mentioned above reported that L’Eau Couture is expected to gross $25 million its first year.) Will I rush out to buy a bottle at retail prices? No. But I’d definitely recommend sampling it to people who aren’t obsessed with perfume but who want a subtle, easy, but real perfume for every day. And if I find a cut-rate bottle somewhere, all bets are off.