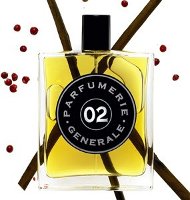 Poor, beleaguered patchouli. Once considered luxurious enough to scent Queen Victoria’s linen closets, patchouli now prompts people turn up their noses and mutter “head shop.” Of course, we fragrance lovers are smarter than that, right? We know patchouli’s woody-herbal aroma lends depth to chypres and earthiness to orientals. Sure, patchouli is that extra something that takes a fruity floral from boring to vile (take that, Calvin Klein Euphoria), but it’s also the soul of elegant fragrances such as Serge Lutens Borneo 18341 — and Parfumerie Générale Coze.

In fact, to get a sense of Coze, imagine that Necco wafer, but crafted by Pierre Hermé. The chef has mixed a pinch of lavender with the cocoa powder, and he’s stored the wafers in an old wooden box with coffee dust in its corners. The mixture approximates tobacco, but is more minty-woody. I can’t pick out any pimento. For such a potentially dessert-like fragrance, Coze is austere.

It’s also fairly linear. What you smell after a few minutes on skin is what you get throughout the life of the fragrance. That seems to work for Coze, though. Instead of being a big, symphonic perfume with crashing cymbals of gardenia and an emotional string section of jasmine and rose, it’s an easy-to-hum folk melody you can’t believe you haven’t heard before. I find Coze firmly unisex.

Sometimes I want something interesting but not serious to wear. I can imagine spritzing on Coze in the fall for long walks. Coze would blend well with the scent of books, coffee shops, and fires, too. I could see alternating it with Annick Goutal Duel for those days I want to smell earthy, warm, and easy, without smelling cliched or overwhelming. Coze’s biggest drawback for me is that it only lasts a few hours before I have to press my nose directly on skin to smell it.

And let me say it one more time: it doesn’t smell anything like hippies.

1. It’s hard to believe now, but the first time I smelled Borneo 1834 I thought it smelled like old socks. Now I could drink it for breakfast.