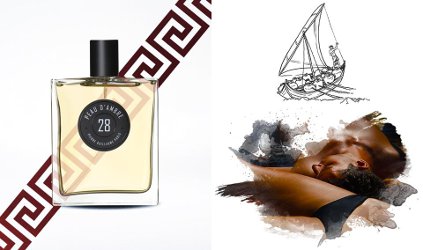 At the beginning of the 6th century BCE, the city of Corinth began its domination of the perfume trade in the ancient world. Ideally placed between the East and the West, Corinthian perfumers exported their perfumed oils in stone vases called alabasters or aryballs. Perfumes and resins traveled in leather gourds aboard small boats that ran along the shores of the Gulf of Corinth.

Imagine for a moment to observe, from the pine forest or the maquis at sunset, the ballet of boats laden with vases of perfumed oils and odorous gums, their leather bottles struggling to contain the scent of resins and balms of ancient potions.

Frankincense, Fir balsam, Opoponax and Benzoin form the resinous quadriga leading amber and leather to the mineral banks of a Mediterranean twilight.