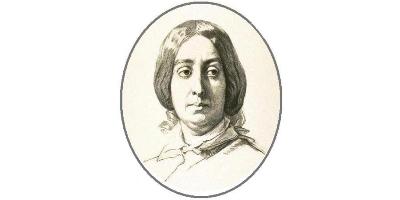 I dream so much and live so little that I’m sometimes only three years old. But the next day I’m three hundred, if the dream has been somber. Isn’t it the same with you? Doesn’t it occasionally seem to you as if you’re starting out on life without even knowing what it is, while at other times you feel weighted down by thousands of centuries of which you have but a dim and painful memory? Where do we come from, and where are we going? Anything’s possible because everything’s unknown.
— George Sand to Gustave Flaubert, Sept. 28, 18661

I “met” George Sand when I was twelve years old. In the county library, I noticed a book called Infamous Woman (I’ve always had a soft spot for infamy); I read the book, a biography of Sand, and became infatuated with her. My infatuation has lasted decades and has morphed from fascination with Sand’s personal life to deep appreciation of her ideas and writing.

Sand was a writer of amazing stamina, producing a huge body of work: 70 novels and novellas, two dozen plays, essays galore, decades of daily diary entries, and 25 volumes of correspondence (each volume around 1,000 pages!)2 I’ve enjoyed many of her novels, but my favorite Sand works are autobiographical, personal — History of My Life/Histoire de ma vie (started when she was 43 and, at completion, comprising five volumes), A Winter in Majorca/Un hiver à Majorque (about a nightmare “vacation” with Frédéric Chopin) and Lettres d’un voyageur (musings on her travels, love life). I start every new year re-reading some of my favorite books, a comforting mental re-boot of sorts; this January finds me reading the amusing, affectionate, sometimes combative correspondence between Gustave Flaubert and Sand.

I love the idea behind the new niche brand Jardins d’Écrivains (writers’ gardens), but how to distill/instill big personalities like George Sand…or Colette or Isak Dinesen into perfumes, candles or bath products? Sand’s interests were varied to say the least: music, theology, theatre, pets, painting, science, philosophy, politics (she was briefly the Minister of Propaganda during the Second Republic in 1848) and cooking (did I start making jams as a teenager because of my grandmother or because I read about Sand’s jam-making marathons and wanted to mimic an idol? I admit it…I was pretentious.)

Maybe the clue to George,3 the first perfume by Jardins d’Écrivains, is the fact that Sand loved botany and gardened with gusto at her country home, Nohant (represented by a Jardins d’Écrivains candle); she had an abiding interest in plants — collecting specimens to grow, research and preserve. On first sniff, I realized George is, perhaps, not an homage to Sand’s flower or vegetable beds, but to indoor “cultivation” — reading/studying, pressing flowers, leaves and stems, and carefully placing dried plants into large-format books for preservation.

George opens with a dark, “polished” vibe; it’s heavy on delicious-smelling Peru balsam and myrrh; these notes, along with citrus, conjure a dim, shuttered study, full of books. There’s a soupçon of an acidic/sharp aroma one sometimes detects in old papers…and dried plants…and in hawthorn, which reminded me of a Henry James quote; he said Sand’s written language "had to the end an odor of the hawthorn and the wild honeysuckle".4 I also detect aromas of waxed wood paneling and floors, and lit beeswax candles — with their whiff of honey…and sweet smoke. As George develops, I smell “woody” black coffee beans, and a touch of sweet, natural-smelling tobacco (imagine a pinch of freshly cured tobacco taken from a leather pouch). Neroli and heliotrope do their work in the periphery…their scents drifting into my imagined study through open windows or Sand’s Eau de Cologne. At the end of George’s development, the rich notes turn “dusty”…providing a pungent powdery finish (the white musk in George is neither utilitarian, nor too sweet). 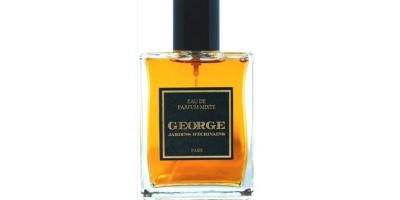 Sand, as a young woman, sometimes dressed in men’s clothes and enjoyed smoking cigars and cigarettes her whole life; she was often referred to by contemporaries, including Elizabeth Barrett Browning and Ivan Turgenev, as “he” (Flaubert called her a “great man” and addressed her in his letters as chère maître, using the feminine adjective “dear” with the masculine noun “master”). George Eau de Parfum is, appropriately, unisex (or “mixte” as Jardins d’Écrivains classifies it).

Jardins d’Écrivains has done George Sand proud, creating a fragrance full of character. (George would have made my “Best of 2012” list if I had smelled it before that post.)

Jardins D’Écrivains George is available at Beautyhabit, in 100 ml Eau de Parfum, $110. Recent additions to the Jardins d’Écrivains perfume line are Gigi (referencing the novel by Colette) and La Dame aux Camélias (based on Marie Duplessis, the lover of Alexandre Dumas fils, and the inspiration for his famous novel).

1. Flaubert-Sand: The Correspondence, translated from the French by Francis Steegmuller and Barbara Bray, Alfred A. Knopf, New York, 1993