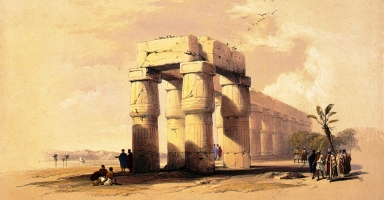 French niche line Memo just launched Luxor Oud* (Oud of the Pharaohs), an olfactory nod to “ancient Egypt and its monumental architecture;” Memo PR provides images of Luxor, the Nile, and crocodiles (ever smelled a crocodile?) Having recently seen the striking Tutankhamun exhibit here in Seattle, I was ready for a perfume snapshot of the New Kingdom. I wanted a spooky-quirky “mummification” perfume (ingredients used in preserving the body after death included beeswax, honey, juniper berries, cinnamon, lichen, palm wine, resins from evergreen trees, wet earth from the Nile riverbanks…even tar (used during the Greco-Roman period). I would also have been thrilled with a kyphi (incense) perfume, with aromas of herbs, wine, raisins, mastic, honey and storax.

Perhaps what I wanted from Luxor Oud was too “literal” and unimaginative? After spraying on Luxor Oud for the first time, I wondered: “Were there strawberries in ancient Egypt?” “Was Luxor the birthplace of fruity perfumes?”

Luxor Oud reminds me of a better-made, higher quality Estée Lauder Wood Mystique — a fruit-ful oud(ish) fragrance. Luxor Oud opens with a powerful fruit accord, accent not on citrus but on red fruits (not the ugly raspberry-scented toilet paper note of Wood Mystique but a smoky strawberry aroma). A mellow, low-impact rose note tinges the fruit — supplying a hint of flowers.

Luxor Oud’s “incense” accord arrives quickly and a pleasant smokiness settles over the ever-present, non-diminishing berries and rose: this earthy-smoky element seems comprised of cypriol (nagarmotha), ‘hot-ash’ storax (with underlying vanillic tones) and wood. As for the “oud”/agarwood in Luxor Oud — it’s in miniscule quantity. (For those who care, the cypriol and agarwood do not produce a “medicinal” vibe in Luxor Oud.)

On the days I wore Luxor Oud it also reminded me of Eau d’Italie Paestum Rose. I grabbed my bottle of Paestum Rose and made a side-by-side comparison; Paestum Rose smells more “modern”, streamlined, and bright. Luxor Oud’s fruity frankincense base made me think of Erik Kormann Eau de Fröhliche too.

Luxor Oud doesn’t conjure ancient Egypt for me (King Tut may have had a different opinion), but it smells great and made me want to try other fragrances from the Memo line. Luxor Oud is a unisex fragrance and it has superb (unbelievable) lasting power and sillage. If a fruity (“happy”) incense perfume appeals to you, do try it.