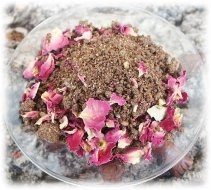 The romance of the past drives many of us to seek out ancient fragrances — antique recipes and perfume formulas that have been resurrected for modern-day use. Egypt casts a spell on fragrance lovers, with its aromas of lotus, mint, papyrus, spices and resins. Add these aromas to images of pyramids and imposing sculptures of the gods, chanting priests (who would recite religious texts while mixing incense), pharaohs and queens, glittering scarabs, gaping-mouthed mummies grasping gold and lapis lazuli scepters between fragile bony fingers, and you have a heady mix of sight, sound and scent.

First mentioned in the Pyramid Texts (dated 2400 BCE or earlier), the recipe for kapet (or kyphi in Greek, meaning "welcome to the gods") was also mentioned by Plutarch (c 46-127 CE) and Galen (129-200 CE) in their writings — linking kyphi with religious ritual and with medicinal uses. Instructions for the preparation of kyphi are found on wall inscriptions at the temples of Edfu and Dendera.

Ancient Egyptians burned incense three times a day to honor the sun-god Ra — at dawn, his birth, frankincense was offered; at noon, his zenith, myrrh was lit; and at sunset, his departure (death), kyphi was burned. Kyphi provided a scented "farewell" to Ra as he started his underworld journey. Another solar connection: kyphi incense was cured in sunshine.

Kyphi’s medicinal uses were many: it was used to induce sleep, to bring sweet dreams, to disinfect the environment, to beautify the skin, to calm nerves, as a treatment for asthma, and to increase the sex drive (even the sex drive of the dead!) Cleopatra, who apparently needed no help in increasing her sex drive, burned kyphi in her private chambers to scent herself, her clothing, and her personal possessions.

Kyphi was a sacred fragrance and like other perfumes in Egypt, it was used to commemorate and perfume the dead, making their bodies beautifully fragrant (god-like). Perfume was always incorporated into public and private celebrations in Egypt.

Nu Essence’s Kyphi is a sticky round tablet. Using a metal implement (a skewer or tiny spoon) pinch off a piece of the mixture, roll it into a ball (pill shaped) and slowly heat it on low heat. For an excellent written and visual description of burning this type of incense see How To Prepare the Kodo Cup at Scents of Earth.

The difference between smelling "fresh" kyphi in the Nu Essence tin and smelling burning kyphi is like the difference between smelling cake batter and the cake baking in the oven — the flavorings and spices deepen and bloom in heat. But still, kyphi is a light incense with an intoxicating fruity freshness on top of the wine and honey notes. Hints of orange, cinnamon, and frankincense emerge the longer it burns. Kyphi scents the house and then quickly disappears; it does not linger long in the environment. No smoke is produced with Nu Essence’s Kyphi formula.

The aroma of kyphi would make an exceptional perfume. Why hasn’t a niche house done this?

Note: image of kyphi via rollenspielwarehouse.de — please note that this is not a picture of the Nu Essence Kyphi.