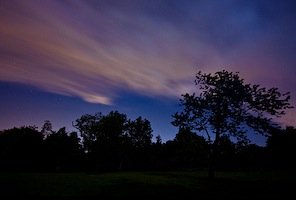 One of the very first products I purchased during my first visit to a Lush shop (in Montréal, in 2002!) was a bottle of shower gel. It was called Happy for S.A.D., it was tinted dark blue, and it had a delightful neroli fragrance; it was unlike any shower gel I'd ever tried before. I'm still partial to Lush's shower gels, and the company's latest offering in this category is no exception. Twilight Shower Gel is a limited edition product for the holiday season. It's a follow-up to the popular Twilight bath bomb (which I've never tried) and it's inspired by "the magical moment betwixt day and night."

Twilight is tinted an appropriately night-sky, deep violet-blue shade, like India ink, so it was likely to win my heart and a place in my bathroom before I even opened the cap. Its fragrance is a blend of natural lavender flower infusion, lavender oil, benzoin, tonka absolute and ylang ylang absolute, as well as some synthetic fragrance ingredients. When I sniff the bottle, I notice the lavender more than anything else. In a steamy shower, when I pour some Twilight onto a mesh puff and work it into a lather, the other elements become much more evident. The benzoin is a rich ambery-resiny note, the ylang ylang is just a hint of exotic flowers, and the tonka is cozy and vanilla-like. There also seems to be some (synthetic?) patchouli curled under the other notes.

As a perfume, Twilight wouldn't be out of place among many mainstream "fruitchouli" and "fleurmand" fragrance offerings, although it smells fuller and more smoothly blended than the average celebrity perfume. (Anyway, I enjoy this kind of scent much more as a soap or shower gel than I do as an actual personal fragrance.) Twilight smells less overpoweringly sweet than some other Lush shower gels, like the honey-and-toffee-inspired It's Raining Men, although it may still be a bit too sweet for anyone who strongly prefers Grass or Dirty. I happen to love it, and I'm tempted to stockpile a reserve bottle or two for the rest of the winter. 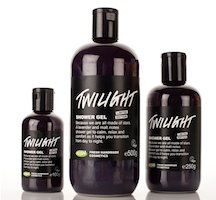 Note: top image is England by Moonlight by Sebastian Anthony at Flickr; some rights reserved.