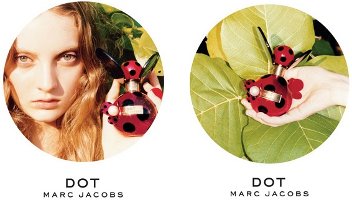 Marc Jacobs' original eponymous fragrance now seems an anomaly (and of course, Blush is nearly forgotten). Since the massive success of 2007's Daisy — followed, of course, by her 'older sister' Lola in 2009 — it's all vinyl flowers and sunshine and happy-happy pop music. Dot fits neatly into the family, from the whimsical (and flanker-ready) bottle to the waifish young model to the oh-so casual advertising.

Perfumer Annie Buzantian's juice is very nearly besides the point — all it need do is play nicely with the "buy me" bottle. Any requirement for surprising and/or edgy and/or challenging has presumably been met by the visual elements; the fragrance itself can settle for pleasant and wearable. Daisy managed this perfectly; even a cranky perfumista like me found it "darned likable". Lola was fine but I didn't like it quite so well, and frankly I don't like this new bottle quite so well,1 but whatevs — I'm old as the hills, and so Marc Jacobs isn't after my money (or my opinion) anyway.

Marc Jacobs has not said where, exactly, Dot fits into the family, but I'd call it Daisy's slightly younger sister. The start is vague tropical fruits, rather sweet and loud, with a bit of sparkle (the notes: red berries, dragon fruit, honeysuckle, jasmine, orange blossom, coconut water, vanilla, musk and driftwood). For the first few minutes, it smells like another 'tween-oriented fruit bomb, but it calms reasonably quickly, and then it's pretty tame stuff — much tamer than Lola, albeit fruitier (and less fresh) than Daisy. The heart is the usual vague "flowers", and the dry down is a pale woody musk. The coconut water, vanilla and "driftwood" are mild — you probably won't notice them unless you're looking for them — but they give Dot a subtle "summer vacation" air.

Dot is neither sophisticated nor sexy, and it isn't trying to be. Memorable, no; distinctive, no again. It's just what it needs to be: cheerful and easy to wear. It isn't quite as perfectly calibrated to "massively pleasant" as Daisy; I found it "likable enough" instead of "darned likable". That may seem like a minor distinction, but I don't think Dot is going to find as large an audience as Daisy, which appealed to a wide range of ages and tastes. Dot's appeal strikes me as more narrow, but it should find legs with its youthful target market, and that may be exactly what was intended. 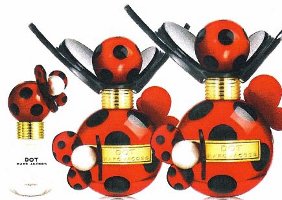 Marc Jacobs Dot is available in 30, 50 and 100 ml Eau de Parfum and in matching body products.

1. Although there is something rather charming about that wee little 30 ml (image above, all the way on the left), isn't there?