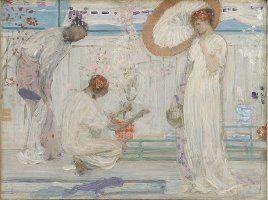 It's taken me a while to get around to trying the Pentachord fragrances from Tauer Perfumes, mainly just because they were difficult to find in New York City for a while and I never quite seemed to get around to placing a sample order. When I did finally try them this month, it was immediately apparent that White was my favorite of the three. Like its fellow Pentachords, White is composed from five synthetic ingredients — no more, no less. In this case, the fragrance's central idea is "the clear melody of royal iris" and its notes are iris root, violet, rosewood, ambergris and Bourbon vanilla.

The official description for Pentachord White evokes "a white clean garden" that combines the "crisp beauty" of its flowers with the "warmth" of its trees and background. I'm noticing much more crispness than warmth in White: the note that makes the strongest impression on me is a cool, silvery-green violet. The violet never really gives way entirely to the softly rooty iris; the two notes intertwine, but the violet remains more prominent. The composition does not, as Tauer has noted, develop as a traditional "pyramid." The vanilla becomes noticeable a while after the floral/leaf/root notes, but it adds just a drop of sweetness without pushing anything into "gourmand" territory, and the faint haze of ambergris doesn't distract much from the enduring iris-violet effect.

Pentachord White is spare and contemporary and well-crafted, and it stands as an intriguing exercise in limitations. Andy Tauer has said that each Pentachord is like a melody with just five notes; you could also draw a literary analogy, in which a poet is challenged to experiment within the strict format of a sonnet or haiku. In an interview from 2011, Tauer says, "If I had to make a picture about Pentachord White, it would be a white picture." This comment inspired my choice of the image above, although White really falls more midway between Whistler's White Symphony and Kazimir Malevich's Suprematist Composition: White on White. (Tauer also informs us that the fragrance's almost metallic clarity is a characteristic of irone alpha, the composition's dominant molecule.)

You may very well like White if you enjoy Les Nez Unicorn Spell or Serge Lutens Bas de Soie (although it is far less "retro" than the latter example). White feels more typically feminine than Tauer's Verdant, although it could still be worn by a man with a taste for these particular notes. I won't be giving up Guerlain Après l'Ondée, my favorite fragrance in the violet-iris category, anytime soon, but White does offer a nicely streamlined alternative for days when I'm feeling more minimalist than usual. 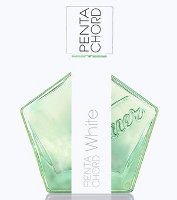