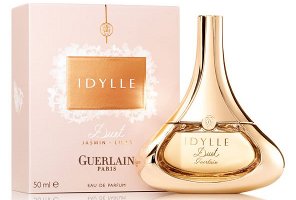 Guerlain has launched Idylle Duet Jasmin-Lilas, the second in the series that began with last year's Idylle Duet, which focused on rose and patchouli. Both fragrances are flankers to the original Guerlain Idylle, which launched in 2009.

Idylle Duet Jasmin-Lilas was developed by Guerlain house perfumer Thierry Wasser; in addition to the flowers in the name, the notes for the chypre floral perfume include rose and woody musk.

Guerlain Idylle Duet Jasmin-Lilas is available in 50 ml Eau de Parfum, and can be found now at Marionnaud in France.