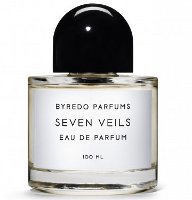 A spicy oriental composition built around the warmth of the vanilla flower and Indian sandalwood.

It is based on the biblical tale of Salome's dance of the Seven Veils, a story of many layers. Tainted and bejeweled, Salome turns to the art of shameless seduction. Barefooted, sanguine and black eyed, she demands a man's head on a plate in exchange for one single dance...

"On that first morning the moon sinks late and you feel the pull, as if it were night, magnetic in a way the sun could never be. Three memories pervade the air. The way you hold it; the way through fingers you let it slip; and the way the woven silk floats across winds. So now floats a perfect fifth, in a minor chord, from an ancient bow, resonating in our ears louder and louder. And louder still until it grows stronger than even our beating hearts. You rise up, upon your feet, and even higher. With seven veils you dance, swirling, swirling, swirling." (Ben Gorham)