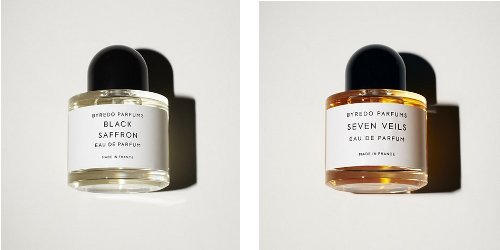 Am I the only fragrance lover who sometimes anthropomorphizes perfume? For instance, to me Caron Tabac Blond is a woman of a certain age who used to be edgy and still won’t suffer fools, but now spends a lot of time reading novels she pulls from her leather handbag; Frédéric Malle Carnal Flower is a radiant starlet almost too beautiful to behold — to the point where she can exhaust you after a few hours; and Guerlain Shalimar is one of the few who can pull off devoré velvet without looking like a Stevie Nicks wannabe.

Similarly Byredo Black Saffron and Seven Veils have distinct personalities. Black Saffron is an introvert who wants to be known as an androgynous intellectual but is too shy to attend any of the parties she’s invited to. Instead, she gorges herself at home on raspberries sprinkled with rosewater while she reads Oscar Wilde in her leather club chair and is in bed by nine o’clock. Seven Veils is a gourmand bombshell who makes a tantalizing, Salome-like entrance, but after a while you get the sense she’s more of a girl-next-door type who’d rather be mixing a bundt cake.

Even with an arm slicked from my sample vial, Black Saffron’s citrus and juniper are barely noticeable. Instead, the fragrance moves right into a sweetened leather with a touch of rose. The leather isn’t oily or sticky sweet, but soft, vaguely fruity, and only a touch earthy with saffron. Despite the prominence of saffron in its name, Black Saffron doesn’t pack the medicinal and metallic but delicious saffron kick of, say, L’Artisan Parfumeur Safran Troublant. The black violet — gosh, everything sounds so alluring when it’s "black" — must be a lot less fragrant than your typical violet. A tickle of pepper lightens the fragrance. Within two hours, I have to press my nose flat to my arm to smell it at all.

Compared with Black Saffron’s murmur, Seven Veils is refreshingly noisy. Its notes include carrot, pimento berries (allspice), Tahitian vanilla flower, laurier rose, glycine (wisteria), tiger orchid, sandalwood and vanilla. It’s unapologetically a vanilla bomb, but the explosion is worth your while with an unexpected blend of herbal carrot and baking spices. This vegetable-spice-flower combo reminds me a little of Etat Libre d’Orange Like This, although Seven Veils is much more vanillic. A vague floral heart lightens it.

Alas, before long, Seven Veils’s sultry beginning devolves into pure vanilla. I thought for sure an animalic note would sneak out as a reference to Salome, but, no, Seven Veils is skank-free. Once the interesting first hour has faded, it’s all vanilla until it dies completely, probably some time the next morning.

Do you every think of your fragrances as personalities? Should we propose this as a new entry to the Diagnostic and Statistical Manual of Mental Disorders?