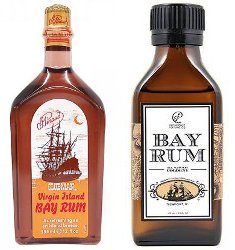 Until a sample of Providence Perfume Co Bay Rum cologne showed up in my mailbox, I’d been vaguely curious about Bay Rum colognes, but not enough to track one down. I’d seen darling straw-thatched bottles of Bay Rum in hat stores by the cash register and the odd retro-looking bottle at a family-owned drugstore. But I couldn’t tell you what Bay Rum smelled like. Well, now I can. And I like it.

According to Wikipedia, Bay Rum cologne is a West Indies cologne, probably originating in Saint Thomas, made from rum, the leaves and berries of the West Indian bay tree (not the culinary bay you might be more familiar with), and spices such as clove and cinnamon. In short, it’s a warm, spicy scent that lovers of linear, spicy fragrances along the lines of L’Artisan Parfumeur Tea for Two and Laura Mercier Minuit Enchanté might want to investigate.

Pinaud Clubman Virgin Island Bay Rum was a must-try for me. At less than $8, and temptingly displayed at eye-level on the drugstore shelf, it joined my toothbrush at the cashier’s counter this week. Pinaud Bay Rum comes in a plastic bottle with a gold plastic cap stamped with a fancy “P” on top and the Pinaud seal molded into its flimsy side. (Putting it in my purse, I felt like I was stashing a bottle of Ripple.)

Pinaud Bay Rum’s label proclaims it’s “formulated with a unique blend of Essence of Bay Tree and Exotic Spices.” Clove and cinnamon are definitely among these “exotic” spices, and I detect a dash of lime, too, giving it a slightly manly feel. Mostly, though, I get musk. It’s not an overly soapy musk, but it’s clean. Mingled with clove and cinnamon, it’s also comfortingly grandfatherly. Pinaud Bay Rum fades quickly, just as it should, and leaves a bare but definite wash of musky spice behind. After an hour or so, it’s gone. For the right person, Pinaud Bay Rum would be a terrific cheap thrill.

Providence Perfume Co Bay Rum cologne classes up the one-two punch of bay and spice to create a fragrance more substantial and complex than Pinaud Bay Rum. Its notes include local rum (local to Providence, Rhode Island, that is), lime, allspice, sea spray, bay, jasmine and ylang ylang. Maybe it’s the illusion of the other notes or the suggestive illustrations of ships that adorn Bay Rum bottles, but I almost smell a lemon-wax-polished wood deck under the fragrance’s soft spice. The fragrance is crisp and doesn't carry any of Pinaud Bay Rum's musk.

The Providence Perfume Co Bay Rum wears more like perfume than like an all-purpose cologne. It’s fairly linear but rich, and it’s not something I’d freshen up with if I thought I’d be applying another fragrance later. It would obliterate most delicate perfumes and scare up a real olfactory ruckus with assertive but girly fragrances.

If I didn’t already own a few spicy perfumes I love, I could see adding a bottle of Providence Perfume Co Bay Rum to my collection. The price is right, and you can truly smell the quality. Mostly, though, I’d like some of those flagrant fougère wearers to hang up their Brut and start thinking old school. Like Bay Rum.

Pinaud Clubman Virgin Island Bay Rum is $7.99 for a 177 ml splash bottle and can be found online and at drugstores.