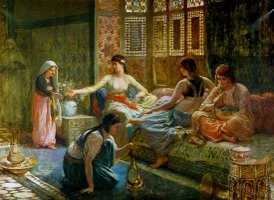 If you could design the perfect perfume boutique, what would it look like? Would you want a private smelling booth? A fainting couch? How about a bar so you could have a drink or an espresso while you wait for the dry down? Would it be all white minimalism like LA's The Scent Bar?  A black-and-gold wrapped present of a room like Ormonde Jayne's London store?  A crowded jewel box with red walls and a chandelier, like New York's Aedes de Venustas? Or something else altogether?

Last fall, Professor Lois Weinthal invited me to lecture on perfume to her interior design seminar at the University of Texas School of Architecture. The students would spend the semester designing an ideal perfume boutique with me as their "client." But there was a twist: their other client would be Professor Jeffrey Siegel, an engineer who studies indoor air pollution. The students would have to satisfy both of us.

On my first class visit I introduced the students to the basics of perfume, including an overview of its history and how it reacts to the warmth of one's body and expands in the air. The biggest challenge in selling perfume, I suggested, is that the product requires time to unfold and to understand. How might the interior of a boutique encourage the customer to stick around long enough to really fall for something?  How could they create a space that allowed for privacy and concentration while still making it easy for sales assistants to help out?

Then, under the guise of introducing them to a few typical perfume genres (citrus, white flowers, oriental and so on) I passed around scent strips, spritzed a few wrists and did my shameless best to convert them to my cause. A good time was had by all, but the seminar room was very small and poorly ventilated and by the end of the session my sinuses and I had to admit there was far too much perfume in the air.

Before I returned, the students went to visit Professor Siegel's lab. Since it's often impossible to change the ventilation systems in retail environments (the spaces are rented, or too expensive to retro-fit) he introduced the students to several passive methods of capturing harmful compounds in the air, including activated charcoal (basically, your Brita filter turned into a loofah-like mat), clay paint (a paint made from unfired clay), a specially formulated cement, and a material that can be substituted for the panels in a typical dropped ceiling.

When I spoke to him later, Professor Siegel told me that while any of these methods would cut down on the amount of perfume in the air, it was equally important that they would eliminate ozone, because some chemicals commonly found in both synthetic and natural aromatic materials react with ozone to form harmful compounds. (Ideally, we would all wear personal ozone-eliminators, perhaps in the form of a specially treated fabric.)  Professor Siegel also mentioned that some studies have hypothesized that chronic over-sprayers who consume huge amounts of perfume may be addicted not to perfume itself, but to these ozone-created compounds. He also noted that ozone can change the scent of a perfume — if you've ever wondered why your perfume smells different on a city street in summer than it does out in the country, ozone might be part of the answer.

In their initial plans, the students were able to address some of my concerns with seating and floor layout — one even included a special room for brides and grooms — while integrating Professor Siegel's air purifying materials into their boutiques in many creative ways. My favorites included a decorative felt wall (felt is also a good material for soaking up scent) and long tabletops (intended as space for testing and discussing perfume) whose surfaces included graceful swathes of activated carbon mat. A few students also took advantage of Austin's weather to create a garden space where clients could relax while their perfume unfolded — an idea that made me dream of a perfume boutique with a reference garden — jasmine, vetiver, bergamot, neroli trees...

Though Professor Weinthal originally assumed that Professor Siegel and I would be at Siskel-and-Ebert odds in our goals, in fact we were closely aligned. I loved the idea of being able to test perfume without a confusing cloud of ambient scent and I like breathing clean air as much as the next person. Some of my favorite perfume lines have tackled these issues, witness the perfumed ceramic rods employed by the Chanel perfume boutique in Saks Fifth Avenue in New York, and the Superman phone booth-sized testing spaces employed by Frederic Malle where the perfumed air is sucked out after each test.

In fact, the real Siskel to my Ebert was the dominant aesthetic — or what the students assumed was the dominant aesthetic, the "right thing to do" — of the School of Architecture and beyond. My fantasy perfume boutique does not look like the polished concrete and brushed steel spaces that house everything from hip restaurants to hair salons these days. When it comes to perfume, I am a romantic. I love that perfume is a gorgeous something extra. I love its strangeness and its secret stories. I don't want to shop in something that looks like a laboratory (sorry Le Labo). I prefer the design cues of a boudoir, an alchemist's cave, a ruined church, or even a surreal dinner party. I'd much rather err on the side of excess than be trapped in the severities of good taste.

So after the mid-semester review, I returned to Professor Weinthal's classroom and began my talk by blowing perfumer Francis Kurkdjian's violet-scented bubbles around the room until everyone was giggling. Then we talked not just about design, and possible options, but about softness, pleasure and what it meant to buy yourself something that was a treat. And we talked about what it meant, as a student, to take risks, to hold on to playfulness in the face of being graded and critiqued.

In the end, the students were hampered by deadlines and the difficulties of mastering the program they used to create their representations. Still, the final results showed touches of humor (one boutique was decorated with gigantic line renderings of noses) and sensuality (low stools in quilted white leather, a curving wooden wall with the perfumes in spotlighted inset niches that created a series of intimate spaces).

But what seemed more important to me was that both the students and the committee of professors who conducted their final critique seemed liberated from the usual run of things by perfume. "This is a perfume boutique. It's an opportunity to do something, well, a little sexy," said one professor. "Sometimes — most of the time," said another, "you have to go too far and get it wrong before you really know what you need."

It's a kind of freedom and provocation that seems worth hanging on to, even if we sometimes have to work a little harder to clear the air.

Note: image is Interior of a Harem by Leon-Auguste-Adolphe Belly via all-history.org.