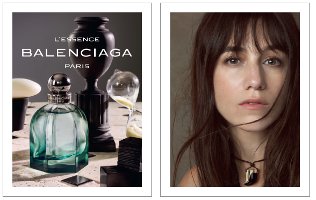 L’Essence wants to say it all and yet it is a liquid enigma. L’Essence is green.

Deliberately so. The designer chose to play with the rules of perfumery and shake up notions of male and female: “Green fragrances are traditionally male, like eau de cologne. However the key to Balenciaga Paris is violet leaves. I wanted to draw on these almost conflicting inspirations, for women”. L’Essence is green because it is honest and vibrant, like the rustle of crumpled leaves. But L’Essence is green as if it were trying to hide the secret of its nocturnal herb scent…

L’Esssence is impulsive. L’Essence is unambiguous. On the skin, L’Essence is as pure as the searing honesty of short-lived flowers. Violet leaves are like a blast of woodland and their youthful energy stimulates the skin. Violet leaves are unfailingly honest and offer up their exquisite coarseness. Vetiver also takes the upper hand, wild, unruly and incisive… L’Essence engages and dazzles with its modulations. And the secret of the forest asserts itself… L’Essence, is also reminiscent of the mossy scent given off by forests at certain times of day, which emphasises the accent of conifers. It is like the fragrance of leather, but it expresses the intrinsic nobility of the organic world.

L’Essence has a keen, intense scent. L’Essence yields and offers resistance. L’Essence, is also about living…

Balenciaga Paris L'Essence will be available in 30, 50 and 75 ml Eau de Parfum.