Tsars come in all shapes, sizes and scents — from the gigantic, most likely musky-cumin-y-indolic-smelling Peter the Great (Unwashed) to the diminutive Nicholas II who had a penchant for fine French and English toiletries. Van Cleef & Arpels’ “fancy”-fougère Tsar was developed by perfumer Philippe Bousseton, and released in 1989. When I first smelled it long ago, Tsar was “too much” to bear (or wear); today, not many perfumes are too much for me, so I decided to give Tsar a re-try.

What is Tsar’s overall effect? Imagine a scrubbed-clean gentleman (Le Tsar, c’est moi!) fresh from a sudsy bath tub; the steamy bathroom is full of the aromas of Swedish pine soap, floral-and-clove-scented pomade, and Eau de Cologne. Clouds of perfumed talcum powder merge with the fragrant steam and create a moist “wall of scent.” Don’t go near Tsar if you dislike strong perfume. 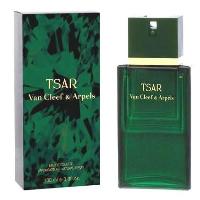 If my memory is correct, Tsar’s formula hasn’t changed much over the years. Today’s version has less oak moss and a not-as-distinct sandalwood aroma (both to be expected); and the current Tsar is not quite as powdery and ‘dense’ as it once was. Still, Tsar has astounding lasting power (it survives an energetic skin-scrubbing in a hot shower) and excellent sillage (do not apply “lavishly” unless you want to scent several city blocks). Tsar is a well-blended, “classic” fragrance. For men who love conservative colognes (ones made with harmonious, quality ingredients), Tsar is a great choice. (Tsar and Ralph Lauren Polo are kissing cousins; if you like one, chances are you’ll appreciate the other.)

Van Cleef & Arpels Tsar Eau de Toilette is $70 for 100 ml; it’s sold (at full price) exclusively at Neiman Marcus and Bergdorf Goodman; it’s also available at online discounters, but make sure you’re buying the “original” formula, and not one of the many limited edition Tsar flankers such as Eau du Tsar and Tsar Cologne. (Let the bottle design be your guide.)