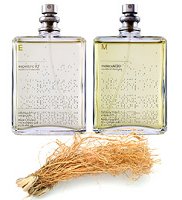 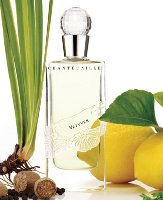 I used to think there were some notes that simply couldn't be done to death. The fragrance industry has proven me wrong on that score. Raise your hand if you'd just as soon not see another new oud fragrance for a few years?

Vetiver hasn't yet reached that stage.1 We've seen a slow but steady stream of new vetivers over the last couple years, but nothing like the fever-pitch rate of new ouds. On the other hand, you know, there are lots of vetivers out there already, and vetiver, like oud, has a tendency to dominate whatever composition it's in. So the bar is set high for a new vetiver fragrance.

Today, I'm looking at new(-ish) vetivers from Escentric Molecules and Chantecaille. Many perfumistas already know about Escentric Molecules, the niche line of perfumer Geza Shoen. They've released three fragrance duos, each consisting of a single note diluted in alcohol, and a fragrance built around that single note. The third duo, which debuted last year, features vetiver. Molecule 03 (the fragrance I'm counting as a half in the title since it isn't really what you'd call a finished fragrance) consists of vetiveryle acetate diluted in alcohol, nothing else. As with Molecule 01 (iso e super) and Molecule 02 (ambroxan), it's probably not the most cost-effective way to get yourself a straight-up aroma chemical, and I've always wondered why they don't release the Molecule fragrances in very small sizes, like 10 or 15 ml?

So anyway, Molecule 03 smells fabulous: deep, earthy and rich, and very woody, with a bright, citrus-y edge on first application. It is smoother and less grassy than my Haitian vetiver oil, and not quite as earthy, and it doesn't last as long on skin. I should think that for many perfumistas, Molecule 03 is a familiar smell — it is not likely to be revelatory in the way that Molecule 01 or Molecule 02 might have been. That it happens to be a smell I already know and love, and would happily wear on its own, perhaps worked against my take on Escentric 03, which features the vetiveryle acetate plus ginger, green peppercorn, lime, orris, jasmine, tea, amber, sandalwood, cedar, leather and musk. Escentric 03 is a sheer fragrance, citrus-y in the opening, with a light peppery bite, then it's gentler and sweeter, slightly floral, with a (still sheer) woody-musky dry down. There is just the lightest whiff of dry leather in the finish, but overall, Escentric 03 is more clean than earthy. It does not, strictly speaking, fade away in an hour, but I found myself consistently wanting to reapply after about an hour; after that, it was just too bland to interest me.

Escentric 03 doesn't smell the same as Diptyque's Vetyverio, but it's very much in the same vein: a light, easy to wear fragrance; men will not find it too floral, women will not find it too heavy on the vetiver. Personally, I found it too light on the vetiver — Molecule 03 was much more satisfying to wear, and if I wore both at the same time, my nose naturally gravitated towards the Molecule 03. I tried layering the two, and that was an improvement but I still preferred the Molecule 03 on its own. I suppose that's the danger of letting your customers smell the components?

Chantecaille's Vetyver, developed by perfumer Pierre Negrin, is marketed to women; it's supposed to blend "distinctive masculine energy with a bold and independent femininity". To my nose, it's no more feminine than any unisex vetiver, and it's certainly not as feminine as the packaging — someone looking for a floral vetiver along the lines of Guerlain Vetiver Pour Elle will probably find this too masculine. To someone like me, who has yet to meet the vetiver too masculine to wear (ok, maybe Maître Parfumeur et Gantier Route du Vetiver), it's a middle-of-the-road vetiver with a smooth finish, nicely accented with citrus and spice (the notes: citron, pepper, nutmeg, bergamot, vetiver, musk and sandalwood). It's quite nice — it's arguably less interesting than Escentric 03, but it also has more vetiver, better lasting power, and more presence in general — and easy to wear, but there's nothing in particular that makes it stand out from the crowd or that justifies the luxury pricing. Still, it's worth a shot, especially if you're taken with the pretty bottle.

Chantecaille Vetyver is $175 for 75 ml, and can be found at department stores.

1. If you don't know vetiver, see here and here. In the images above, you see vetiver roots, dried on the left, with the grass still attached on the right.