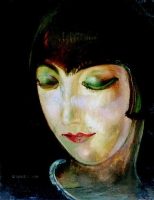 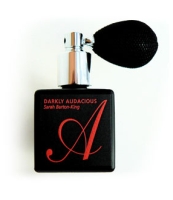 Darkly Audacious is the third fragrance from The Pink Room, the niche company founded by stylist-designer Sarah Barton-King. It was created in collaboration with Cyrille Carles of Société Grassoise de Parfumerie, and it's a "woody amber" composition with top notes of lemon, bergamot, and rosewood; heart notes of jasmine absolute, cashmere wood, and plum; and base notes of dark patchouli, incense, amber, tonka bean, and vanilla.

Like The Pink Room's previous releases, Darkly Audacious is accompanied by a short prose-poem that sets the mood for the fragrance. The story for this perfume evokes the decadent nightlife of Paris between the World Wars, describing an encounter between two chic, mysterious figures in a bar or club — it's the sort of scene captured in photographs by Brassaï. Like the characters in Barton-King's fantasy, Darkly Audacious's composition opens on an androgynous note, with its citrus and rosewood combining in a mellow, boozy way that reminds me of a fancy brandy cocktail. The heart of the fragrance is slightly more feminine, with a jasmine-vanilla chord and a hit of plummy spice; there's also a glossy sandalwood note running throughout the rest of the fragrance's development. The dry down phase is a blend of tonka and amber with just a suggestion of powderiness.

The Pink Room describes Darkly Audacious as "voluptuous, warm, and intensely feminine, yet ambiguous." It's actually less overtly feminine than I expected, but it's certainly warm, and while it's not as "voluptuous" as it reads on paper, it does have a velvety feel. It's a very smooth, well-blended scent with good staying power and it wears fairly close to the skin. It's quietly sensual and a bit enigmatic, rather than bold.

As a young girl, I was impressed by the classic fragrances worn by the "grown-up" women in my family — Guerlain Shalimar, Rochas Femme, Raphael Replique — and I still admire those fragrances, even though I can't quite carry them off in most of my everyday life. Instead, I find myself gravitating towards fragrances that have an updated "vintage" sensibility, softened or lightened a bit for present-day wear. Darkly Audacious fits this category nicely, and it's more "me" than either of the two earlier Pink Room perfumes. I thought both were well done, but neither of them quite fits my style: I'd agree with Robin that the tea-party-themed The Pink Room Parfum no. 1 "calls for pearls and a silk dress, and maybe even a hat" (whereas I'm more of an urban romantic), and the fruity-musky Pour Toi (also composed by Cyrille Carles) is a little too heavy on the berry notes for my taste.

Like all of The Pink Room's fragrance products, Darkly Audacious is elaborately and flirtatiously packaged: the full-size bottle of perfume is nestled into a black hatbox lined with red satin, and the travel-size atomizer is tucked into a black box that suggests a small clutch purse. This presentation is a nice reminder that fragrance is an important accessory in our own stories, even if we're not the fast-living habitués of a 1920s nightclub.

The Pink Room Darkly Audacious is available as 50 ml (shown top right, $125) and 15 ml travel spray ($50), concentration unknown. (A matching body cream and candle are in the works.)  For purchasing information, see The Pink Room under Perfume Houses.